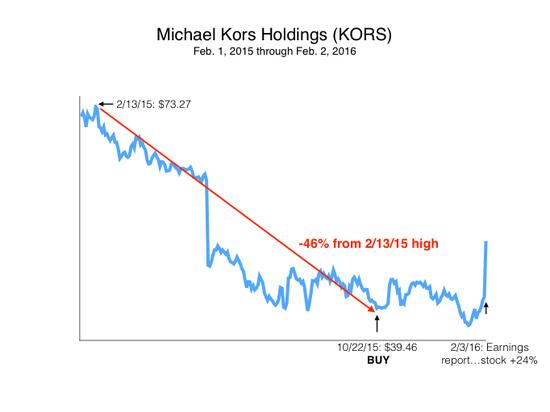 Are You Buying a Bargain Or Catching a Falling Knife?

“Everyone likes buying a bargain, but catching a falling knife is no fun at all.”
-Wall Street Journal, Jan. 21, 2016

Who wouldn’t want to buy a stock while its price is plunging and see the price pivot and soar higher? Unfortunately, buying at the bottom bid and selling at the highest offer—when they do occur—are outlier events. Many times, a bargain price quickly become a bigger bargain in a falling market.

Bernard Baruch warned: “Don’t try to buy at the bottom and sell at the top. This can’t be done—except by liars.”

Buying stocks when they are trading below their intrinsic value has made fortunes for many investors. Yet knowing that, many investors have trouble pulling the trigger, especially in falling markets. There seems to be something in human behavior that prevents people from wanting to see an unrealized loss on their brokerage statement.

There is a distinction, however, between buying a stock at a bargain price and catching a falling knife.

When buying a stock at a bargain price, an intelligent investor already has done their homework. They have an idea what the intrinsic value of the company is, and given a margin of safety, they are quite confident that they are buying a dollar bill for 60 or 70 cents—assuming they did their research. If the price of the stock heads lower, it creates a bigger bargain and a lower risk.

On the other hand, catching a falling knife is a bit different—in that case the investor has no idea what the intrinsic value of the stock is and any decline after they purchase it is seen as a mistake…or being too early. In a nutshell, they are trying to trade based on the emotions of the crowd.

On Oct. 22, 2015 we added Michael Kors Holdings (KOR), a global accessories, footwear and apparel company to our portfolio at a price of $ 39.46. At the time of purchase, Michael Kors had a strong balance sheet, a strong brand, and was trading for a trailing P/E of 10.

In February 2015, eight months earlier, the stock price had traded as high at $ 73.27. When we added it to our portfolio, it was off more than 46% from its most recent high.

While others may have seen our purchase as trying to “catch a falling knife,” we saw it as buying a dollar bill for 70 cents. If the stock price went lower, we would be able to add more shares and buy at a bigger discount.

Since we analyzed the company and came to the conclusion that the problems and challenges the company was going through were short term and fixable, we were able to buy with confidence.

After a short blip up after our purchase, the stock price traded as low as $ 35.57 a share, down about 10% from our entry.

On Feb. 2, Michael Kors reported their earnings—revenue, comparable store sales and earnings growth exceeded expectations, and the stock price soared 24% to close at $ 50.11.

We are now ahead on the trade by 33%, and look to sell if the stock price trades in the high $ 50s to low $ 60s range, at which time it would be selling pretty close to our estimation of intrinsic value.

When looking to add stocks to our portfolio, the two major variables we look at are financially sound companies trading at an attractive price.

The recent market sell-off has seen an increase in gloom and doom among investors. The Russell 2000 has been especially hit hard—dropping more than 22% since the high made in June 2015.

Instead of worrying about catching falling knifes, investors should focus on buying dollar bills that are trading for 70 cents.

Here are a few stocks that are on a radar screen. They all have strong balance sheets and are trading for a trailing P/E of no greater than 11. In addition, they are all down greater than 40% from their 52-week high:

Once you do your homework, you are no longer trying to catch a falling knife; instead you are buying a financially sound company at a bargain price, and that’s the way fortunes are made.

Charles Mizrahi is the editor of Hidden Values Alert and the Inevitable Wealth Portfolio newsletters and has been investing in stocks for the past 30 years.

Hidden Values Alert has been named one of Marketwatch.com’s 10 Best Advisors from October 2007 to January 2015…a period that included the Financial Crisis of 2008 and the subsequent bull market that began March 2009.

While many gurus boast of astronomical rates of returns over very short time spans, their claims don’t stand up to scrutiny. Instead, their “returns,” when reviewed by an independent third party, melt away faster than ice cream on a hot summer day.

The returns that Charles has racked up are certified by Hulbert Financial Digest – the fiercely independent rating service that tracks the performance of financial newsletters.

Charles is also the author of the highly acclaimed book, Getting Started in Value Investing (Wiley).