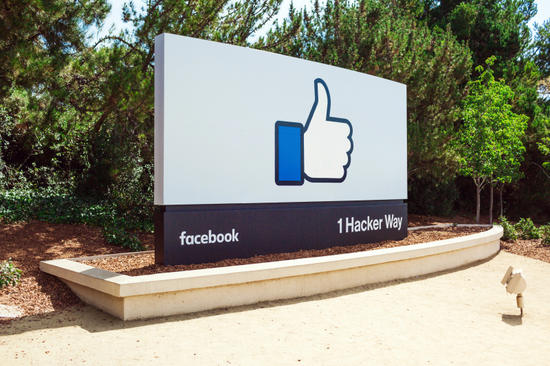 In some cases, companies are valued not according to assets in place, but mostly growth prospects and future assets, which are derived from various technologies held by the firm. This is certainly the case of Facebook (NASDAQ:FB), which currently trades at about 106x in P/E ratio and about 20x in P/S ratio. These compare to the industry averages of about 32x and 6x.

Facebook has a market capitalization of about $ 294 billion. It has annual revenues of just over $ 14.6 billion and net income of $ 2.7 billion.

The social media giant is one of the hottest stocks at the moment and has recently surged 22% from $ 86 per share to $ 105 per share in the last 30 days. Very few companies as big as Facebook are able to deliver that kind of return within such a short time. Facebook is currently up 33% YTD compared to the same period last year, and looks set to continue on that trend to the end of the year.

On the other hand, two of the company’s tech rivals Alphabet (NASDAQ:GOOG) (NASDAQ:GOOGL) and Microsoft (NASDAQ:MSFT) are up 38% and 18%, while Twitter(NYSE:TWTR) is down nearly 30% on a year-over-year basis. 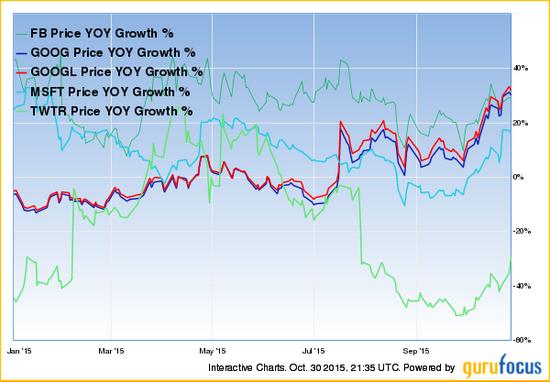 Alphabet and Microsoft have more or less matched the gains made by Facebook over the last few weeks, while Twitter trails them despite a significant surge in price. While Microsoft is a rather distant cousin when it comes to business operations compared to Facebook, Alphabet and Twitter are close peers.

Facebook is the closest you will ever come when looking for a similar client base to Alphabet. The search engine giant leads the list as it boasts a massive user base via search and YouTube.

When it comes to revenue and earnings, however, Facebook lags far behind Alphabet. Alphabet reports annual revenue of about $ 72 billion and net income of roughly $ 15 billion, while Facebook’s top line and bottom line come at about $ 14.6 billion and $ 2.7 billion. By comparison, Alphabet is making nearly 5x in revenue versus Facebook, and tramps the social media giant’s bottom line at 5.55x.

This comes despite the fact that in terms of market capitalization, Alphabet is only 1.67x the size of Facebook. As such, this begs the question of whether Facebook is highly overvalued.

However, Facebook is barely a decade old and went public three years ago, compared to Google, which will clock two decades three years from now. The search engine giant has also been a public company much longer than Facebook, which means that investors have had enough time to analyze the stock and its potential for growth.

On the other hand, Facebook is a different kind of player in the industry, as it seeks to augment the search business with social media as well as video advertising. The company has yet to unlock the full potential of its multiple revenue streams; this is why investors are willing to attach such a hefty premium on its stock price.

With Facebook, investors believe that the best is yet to come since the company is still in the process of monetizing some of its business units, including videos. Therefore, Facebook is not overvalued especially when looking at the stock with a long-term view.

Based on recent data, Facebook reached 1.49 billion monthly active users (MAUs) on the desktop platform as of June 30, while the mobile statistics posted as of April 22 came at 1.31 billion MAUs. On the other hand, the company’s mobile messaging app WhatsApp, which it acquired last year for $ 19 billion, has already reached 900 million MAUs and looks set to continue on that trend.

The company’s recent performances in terms of revenues, income and cash flows have not been very impressive with growth rates beginning to show signs of weakness. Nonetheless, Facebook has still managed to significantly improve on the three fronts, and this is a sign that there is more to come. 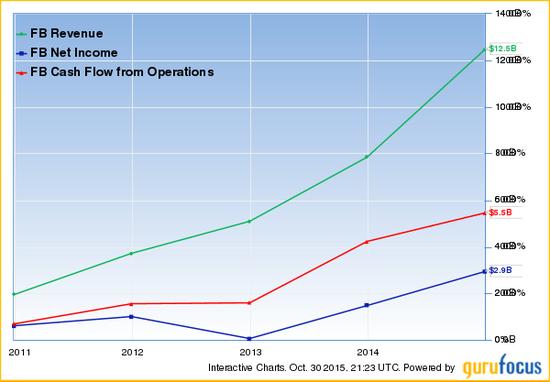 Given the company’s massive user-base, it is quite clear that it has the ability to generate more revenues and income than it is currently posting.

The figures suggest that the company books about $ 10 per user on an annual basis assuming the MAUs represent the average for a fiscal year. This translates to less than a dollar spent per user per month. Facebook’s revenue mainly comes from advertisements posted by large companies such as AT&T (NYSE:T), General Motors (NYSE:GM) and huge oil and gas players, which have millions of followers along with local small and medium sized businesses with a few thousand followers.

The company has yet to find the best way of generating money from individual users that are not interested in advertising, as it lets people use the service free of charge. This is likely to be the case for the foreseeable future, but no one can really tell what will happen in the long run.

If Facebook wants to match Google’s valuation metrics, then it simply must improve on both revenue and earnings by at least 100% within the next few years.

The company reports Q3 2015 results in the next few days and analysts are already very optimistic as they expect 36% and 30% growth rates on the two figures year-over-year. If this is replicated across the other quarters, then 100% revenue and income growth could be achieved in a matter of three years.

However, investors will be definitely monitoring periodic developments and this should continue to push the stock price higher with every positive earnings surprise.

The bottom line is that Facebook’s potential for growth is so high that investors are willing to pay a hefty premium in order to own the stock. The company has multiple revenue streams that are yet to be fully monetized and is still exploring other opportunities to boost its top line.

However, given the current revenues and income numbers, Facebook has yet to reach where most investors expect it to be. Nonetheless, the stock is still a very interesting opportunity for long-term investors.

Nicholas has a solid knowledge of both the U.S and European markets having done several stock analysis over the last three years. His investment style is focused on undervalued plays and growth stocks. As a trader, Nicholas classifies himself as a swing trader and likes to trade GBP/USD, Gold and FTSE 100, among other liquid instruments.