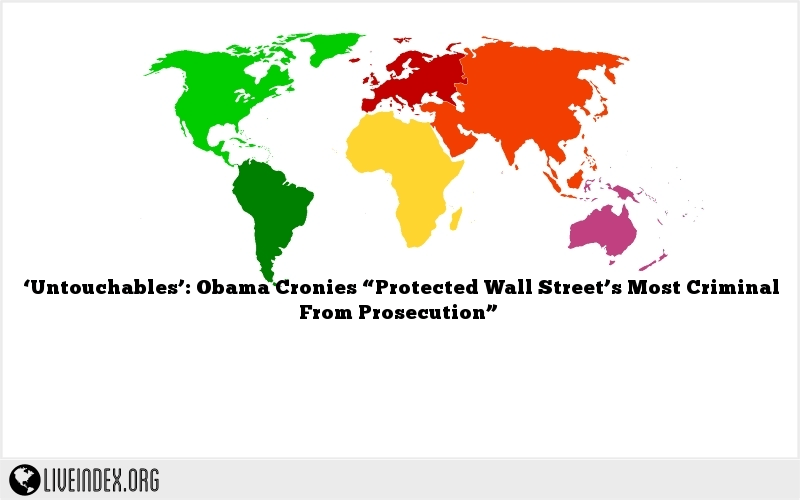 The slow motion financial holocaust has been underway for some time now.

Goldman Sach recently commented that we are in the third wave of the great crisis. What happened in 2008 remains directly relevant to the personal financial risk that most Americans face at the brink of the next phase of the collapse.

It’s almost like they’re looking for a sacrificial lamb… the banks have gotten away with murder too many times to count. Those who might be tried under a truly fair system instead stand firm with their understanding of impunity, an arrangement befitting their position and stature in society, that they will never be seriously investigated, much less prosecuted, for their role in the manipulation that caused the biggest problems.

Worse, it is utterly clear that Obama’s Justice Department went out of their way to avoid prosecuting Wall Street executives – even despite pressure from Congress’ Oversight Panel, created as a condition of TARP, to do so as a result of piles of evidence that criminal misbehavior was behind the worst of the collapse.

Attorney General Eric Holder was nominally in charge of the Justice Department’s investigations – and it is well worth pointing out that he spent the entirety of his time after being Clinton’s Deputy Attorney General, at Covington & Burling, a legal firm that specializes in representing top Wall Street institutions. Wikipedia notes:

In July 2015, Holder rejoined Covington & Burling, the law firm at which he worked before becoming Attorney General. The law firm’s clients have included many of the large banks Holder declined to prosecute for their alleged role in the financial crisis.Matt Taibbi of Rolling Stone opined about the move, “I think this is probably the single biggest example of the revolving door that we’ve ever had.”

Clearly, with big banks as a client in-waiting and a past benefactor with him his law firm had a deep relationship, Holder was never realistically capable of considering a meaningful prosecution of the banks. Most of the rationale given to the public remained based around the despicable idea that banks were “too big to fail.”

Investigative journalist Glenn Greenwald – notorious for launchign the first interviews and data dumps with Edward Snowden – taken on the criminality of the Wall Street banks during the period surrounding the 2008 financial crisis, focusing on the obstruction of the Justice Department, who have effectively refused to target higher-ups in any of their probes:

PBS’ Frontline broadcast a new one-hour report on one of the greatest and most shameful failings of the Obama administration: the lack of even a single arrest or prosecution of any senior Wall Street banker for the systemic fraud that precipitated the 2008 financial crisis: a crisis from which millions of people around the world are still suffering. What this program particularly demonstrated was that the Obama justice department, in particular the Chief of its Criminal Division, Lanny Breuer, never even tried to hold the high-level criminals accountable.

What Obama justice officials did instead is exactly what they did in the face of high-level Bush era crimes of torture and warrantless eavesdropping: namely, acted to protect the most powerful factions in the society in the face of overwhelming evidence of serious criminality. Indeed, financial elites were not only vested with immunity for their fraud, but thrived as a result of it, even as ordinary Americans continue to suffer the effects of that crisis.

[…] As “The Untouchables” put it: while no senior Wall Street executives have been prosecuted, “many small mortgage brokers, loan appraisers and even home buyers” have been.

[…]  the DOJ’s excuse for failing to prosecute Wall Street executives – that it was too hard to obtain convictions – “has always defied common sense – and all the more so now that a fuller picture is emerging of the range of banks’ reckless and lawless activities, including interest-rate rigging, money laundering, securities fraud and excessive speculation.”

As former Wall Street analyst Yves Smith wrote: “What went on at Lehman and AIG, as well as the chicanery in the CDO [collateralized debt obligation] business, by any sensible standard is criminal.” Even lifelong Wall Street defender Alan Greenspan, the former Federal Reserve Chair, said in Congressional testimony that “a lot of that stuff was just plain fraud.”

“In 2009… “there was broad support for prosecuting Wall Street.” Nonetheless: “four years later, there have been no arrests of any senior Wall Street executives” … the key point: Obama officials never even tried.

Now dated by four years, PBS Frontline ran an investigative report on the topic: The Untouchables: How the Obama administration protected Wall Street from prosecutions  (which can be watched in full here).

As regular readers already know at SHTF, countless voices have come forward to expose the criminal fraud surrounding the banks, and the bipartisan criminal cover-up taking place in Washington.

The reason there have been no efforts made to criminally investigate is obvious. Former banking regulator and current securities Professor Bill Black told Bill Moyers in 2009 that “Timothy Geithner, the Secretary of the Treasury, and others in the administration, with the banks, are engaged in a cover up to keep us from knowing what went wrong.” In the documentary “Inside Job”, the economist Nouriel Roubini, when asked why there have been no such investigations, replied: “Because then you’d find the culprits.” Underlying all of that is what the Senate’s second-highest ranking Democrat, Dick Durbin, admitted in 2009: the banks “frankly own the place”.

Impunity has been the norm. Systemic money laundering for terrorists, gangs and drug cartels, the likes of which has been officially tied to institutions like HSBC and Wachovia – were settled with fines that represent a slap on the wrist to these ‘too big to jail’ globally-linked banks.

Meanwhile, the next wave is upon us.