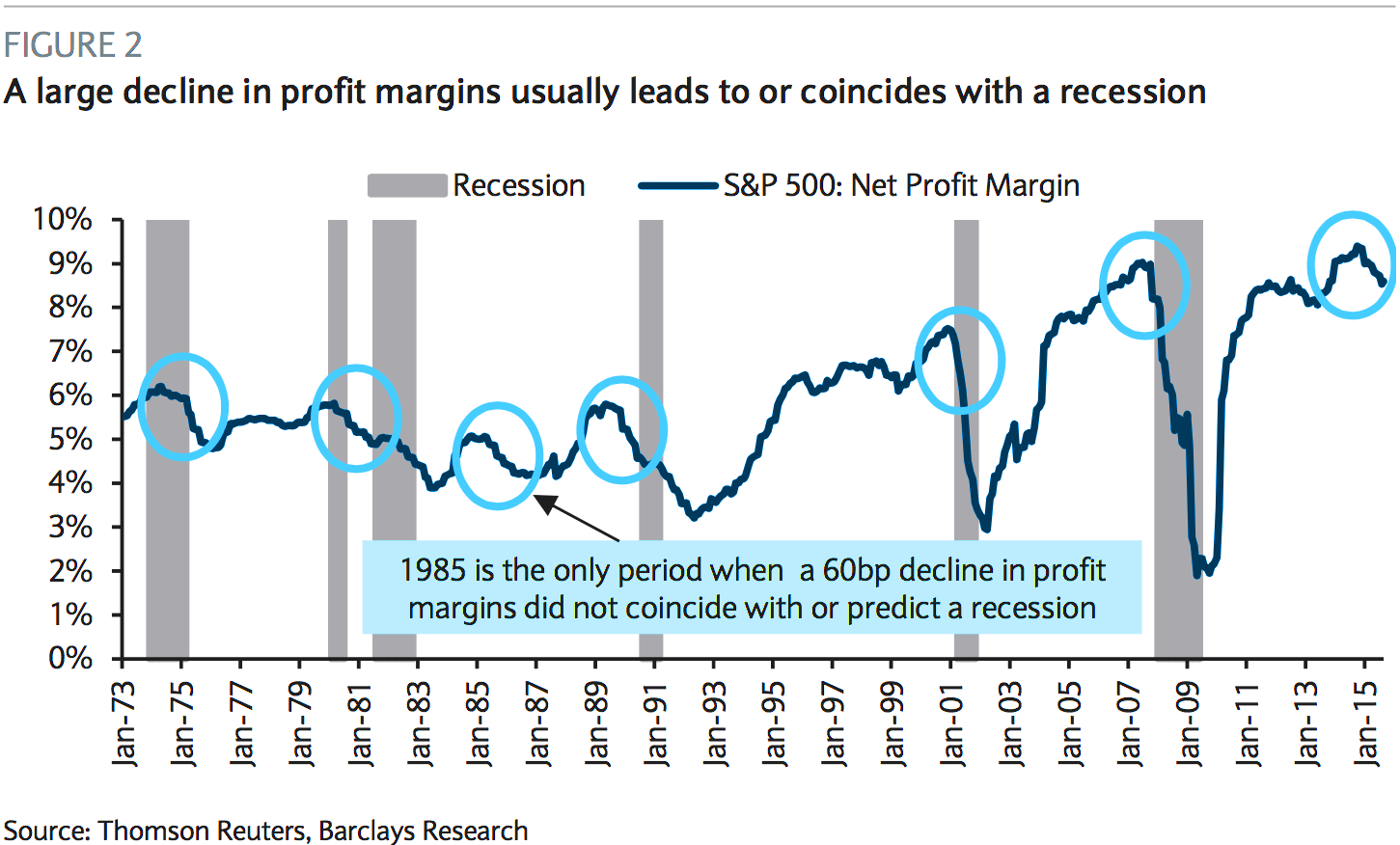 4 Warnings And Why You Should Pay Attention

When I was growing up my father, probably much like yours, had pearls of wisdom that he would drop along the way. It wasn’t until much later in life that I learned that such knowledge did not come from books, but through experience. One of my favorite pieces of “wisdom” was:

“Exactly how many warnings do need before you figure out that something bad is about to happen?”

Of course, back then, he was mostly referring to warnings he issued to me “not” to do something I was determined to do such as jumping off the roof with a bedsheet convinced it was a parachute. After I had broken my wrist, I understood what he meant.

Over the weekend, those warnings came to mind as the recent bounce in the financial markets once again has individuals scrambling to grab “bedsheets” to jump off the roof once again. Of course, much of their behavior is driven by mainstream commentary suggesting that the recent market rout is over.

However, there are currently plenty of warning signs that suggest that individuals might want to reconsider the risks before taking that leap. Here are four warnings to consider.

Edward Harrison at Credit Writedowns picked up on the issue of declining profit margins that I addressed last week.

“While I am not talking about recession yet, I do think we are seeing economic weakness toward the end of the business cycle. And while that doesn’t mean recession in the near-term, it could do in the medium-term.

We know from history that the dates when profits rolled over coincide very much with the slide into recession. My interpretation of these data is exactly as Barclays says, that you get enough of a slide in profits and it generally leads to recession. That is because the profits recession comes as a result of a weakening economy that has weakened so much that companies are no longer able to cut costs, buy back shares or massage accounting enough to keep profits rising.

We are now in the seventh year of a cyclical recovery and bull market. Shares have tripled in that time frame. I would say this means we are much closer to the end of the business cycle than the beginning. Moreover, as Jeremy Grantham is quoted in the Business Insider piece, profits are mean-reverting and right now they are reverting from a phase that is “wildly optimistic” according to Warren Buffett. All of this is taking place against the backdrop of an economy in which wage growth is weak, household debt is still relatively high on a historic basis as a percentage of income and we have no policy room on the monetary side, with limited political appetite for policy on the fiscal side.

“Margin debt contracting is a sign of loss of investor confidence and it’s confirmation of a lot of other evidence we have that we’ve entered a cyclical bear market. We got a lot of traditional warning signs leading up to the high in terms of market action, and deteriorating breadth and margin debt is important to the supply-demand analysis.” 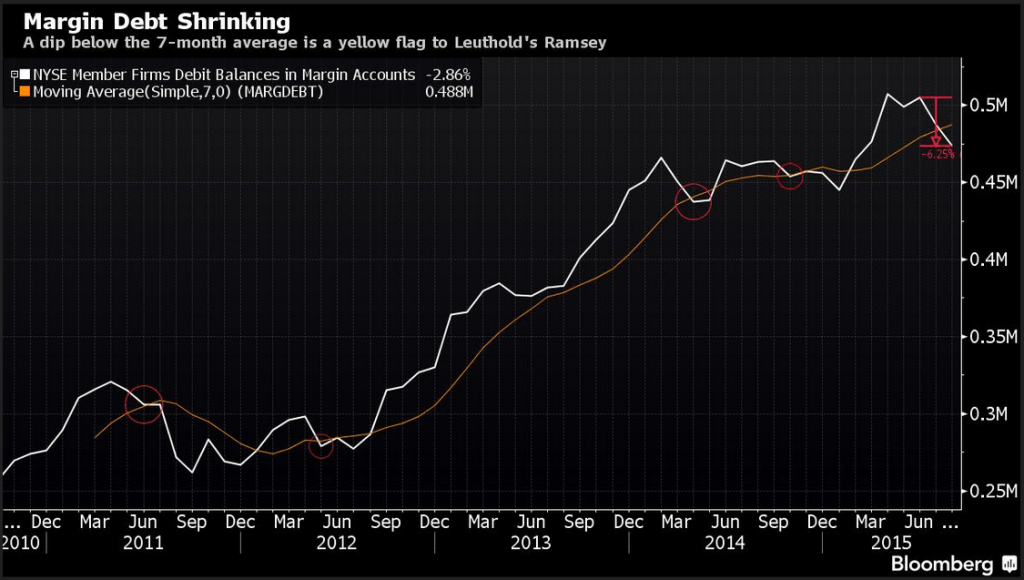 As I have discussed previously, the importance of margin debt as it relates to the market should not be dismissed. To wit:

“While ‘this time could certainly be different,’ the reality is that leverage of this magnitude is ‘gasoline waiting on a match.’ When an event eventually occurs, that creates a rush to sell in the markets, the decline in prices will reach a point that triggers an initial round of margin calls.

Notice in the chart that margin debt reductions begins innocently enough before accelerating sharply to the downside.”

No one knows for sure where how far the market needs to fall before “margin calls” are triggered. However, if that point is eventually reached, there will be very little investors can do to shield themselves from the decline.

Valuations are a very poor market timing device for short-term investors. However, from a long-term investment perspective, valuations mean a great deal as it relates to expected returns. Chris Brightman at Research Affiliatesrecently noted this exact point.

“As a long-term investor, we experience short-term price volatility as opportunity, and high prices as risk.”

With earnings growth deteriorating, and valuation expansion having ceased, the risk of high-prices has risen sharply. As I addressed in “Shiller’s CAPE – Is There A Better Measure:”

“The need to smooth earnings volatility is necessary to get a better understanding of what the underlying trend of valuations actually is. For investor’s periods of ‘valuation expansion’ are where the bulk of the gains in the financial markets have been made over the last 114 years. History shows, that during periods of ‘valuation compression’ returns are much more muted and volatile.

Therefore, in order to compensate for the potential ‘duration mismatch’ of a faster moving market environment, I recalculated the CAPE ratio using a 5-year average as shown in the chart below.”

Ultimately, asset prices are a reflection of the underlying economic growth and, as Edward Harrison noted above, we are very long in the current economic cycle.

I regularly publish the Economic Output Composite Index which is comprised of the Chicago Fed National Activity Index (a broad measure of 85-subcomponents), the Fed regional manufacturing surveys, the NFIB survey, LEI index, and the Chicago PMI. The correlation between this index and the real economic activity is very high. 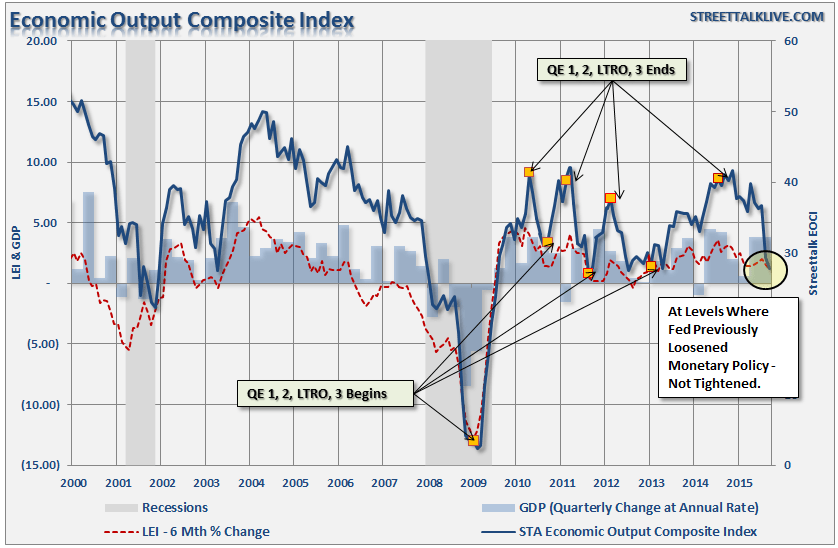 Notice that the EOCI index has now fallen to levels where the Federal Reserve has previously “loosened” monetary policy by adding accommodative measures such as “Quantitative Easing.” Importantly, despite the Fed’s assurances, the economy is clearly not strong enough to withstand a “tightening” of monetary policy by increasing interest rates.

As you will also notice, not only have sharp drops in the EOCI index been coincident with far weaker economic activity, but also declines in asset prices as well.

Of course, these are just “warning signs.” None them suggest that the markets, or the economy, are immediately plunging into the next recession-driven market reversion.

But they are warning signs nonetheless. Past experience suggests that future returns are likely to be far less than historical averages suggest. Furthermore, there is a dramatic difference between investing for 30 years and whatever time you have left before you need your retirement funds intact.

While much of the mainstream media suggests that you “invest for the long-term” and “buy and hold” regardless of what the market brings, that is not what professional investors are doing. As addressed recently by UBS:

We challenge through black-swan scenarios every month, every week, every day. We try to understand what in our scenarios is a given, and what happens when it’s not a given when it could cause very significant losses for the investment bank.

Rate hikes, big volatility swings, are things we try to anticipate, and we do that all the time. We try to compensate for lack of experience through a lot of thinking.”

The point here is simple. No professional or successful investor every bought and held for the long-term without regard, or respect, for the risks that are undertaken. If the professionals are looking at “risk” and planning on how to protect their capital from losses when things go wrong – then why aren’t you?

Exactly how many warnings do you need?