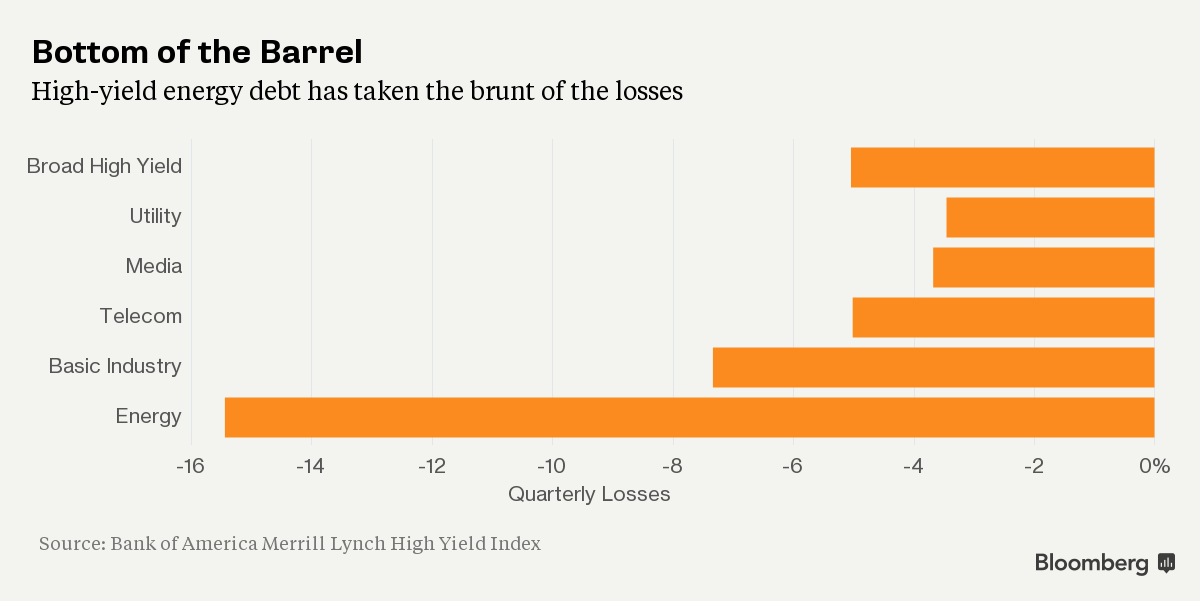 This Might Be The Biggest Risk In The Markets

Junk-bond investors are closing the books on their worst quarter in four years. And there’s no sign the pain will end.

Investors who helped companies from Valeant Pharmaceuticals International Inc. to Chenier Energy Inc. raise a record $ 1.7 trillion of new speculative-grade bonds in the past five years are now bracing for the end of the credit boom as debt-laden businesses grapple with lackluster earnings. For the first time in more than 20 years, U.S. speculative-grade bonds are set to post a fourth straight month of losses, Bank of America Merrill Lynch indexes show.

What started as a decline in commodities-related debt with the collapse in oil prices last year is spilling out to industries including retail, media and telecommunications. More than half the sectors in the market have reported losses for five months, a streak not seen since the 2008 financial crisis, according to Bank of America Corp. analysts.

“The malaise is spreading, albeit slowly,” Bank of America’s Michael Contopoulos wrote in a report Tuesday. “We suspect that this is the start of a long, slow and painful unwind of the excesses of the last five years.”

Chesapeake securities lost more than 22 percent in the quarter. The U.S. natural-gas explorer announced Tuesday it plans to cut 15 percent of its workforce as it battles a drop in commodity prices. Bombardier bonds plunged 16 percent in the last three months as cash-strapped aircraft maker reels struggles with slow sales of the CSeries, its biggest jet ever. 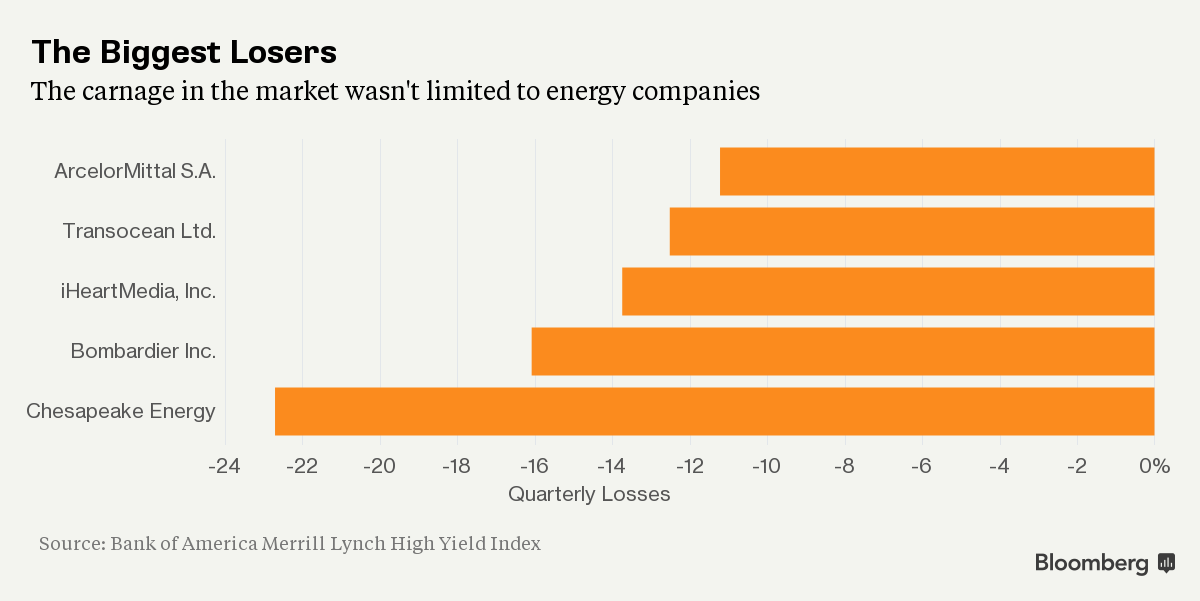 Investors have gorged on returns of almost 80 percent from the junk-bond market since the credit crisis began in 2008, the index data show. The debt can still produce good results, Barclays Plc strategists wrote in a report last week.

“We generally believe that the fundamental backdrop is healthy and that the U.S. economy will remain resilient,” strategists led by Bradley Rogoff wrote in the September 25 report.

The question for the bond market is whether growth in the U.S. and Europe can offset a slowdown in China, the world’s second-largest economy. The U.S. Federal Reserve this month left its benchmark rate near zero, saying the U.S. economy and inflation may be restrained by “recent global economic and financial developments.” Fed Chair Janet Yellen said the financial turmoil reflected investor concerns about risks to Chinese growth.

Glencore Plc, which rode a commodity boom fueled by the Asian nation over the past decade, was hit hard this week as investor worries over its ability to rein in a $ 30 billion pile of net debt sparked a global selloff. The rout sent junk-bond yields over 8% for the first time in three years, Bank of America Merrill Lynch index data shows.

European high-yield bonds are headed for the worst month since November 2011, returning -2.7% through Tuesday, according to a Bank of America Merrill Lynch index. The average yield rose to the highest since June 2013. Sales of speculative-grade debt this month have been the slowest in a September since 2007, according to data compiled by Bloomberg.

Amid the bearish sentiment, the cost of insuring against speculative-grade companies rose this week as traders adopted a new version of the high-yield credit-default swaps index. The gauge increased its exposure to the energy sector, driving up the cost of hedging using the index. The average price of contracts linked to the new names were about three times as much as those being taken out, according to Anindya Basu, a structured-credit strategist at Citigroup Inc.

“You have stuff in the market that is just too levered,” said Christian Hoffmann, a Santa Fe, New Mexico-based money manager at Thornburg Investment Management Inc., which oversees $ 65 billion. “And when the equity market wobbles and there are questions about economic growth, debt you assumed was good suddenly doesn’t look as good.”