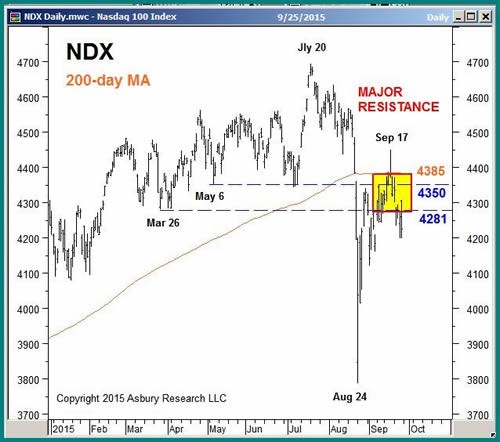 All major U.S. indices finished in the red last week, led by the market-leading Nasdaq 100 and Russell 2000, which more than relinquished their modest gains of a week earlier. Last week’s decline resulted in all major indices falling back into negative territory for 2015.

All sectors of the S&P 500 closed lower last week with the exception of financials, consumer staples and utilities. The latter two are defensive and thus expected to outperform during a down week.

Interestingly, Asbury Research’s asset flow-based metric showed the biggest outflow of sector bet-related assets during the past one-week and one-month periods came from former 2015 highflier health care. While it is still among the strongest sectors of the S&P 500 year to date, it now looks vulnerable to more weakness during the fourth quarter.

Market Must Break Resistance to Confirm a Bottom

In last week’s Market Outlook, I pointed out an important overhead resistance level at 641 in the market-leading PHLX Semiconductor (SOX) index. I said a sustained rise above it would be necessary to help confirm a broader market bottom was in place. The SOX closed last week 7.5% below this level at 593.

The Nasdaq 100 is another market leader with an important resistance level to watch. That level is from 4,281 to 4,385 and, as the chart below shows, is currently being tested.

The band of resistance represents the March 26 and May 6 lows, and the 200-day moving average, a widely watched major trend proxy. It would take a sustained move back above this level to confirm the market rebound that historically takes place during the fourth quarter is under way again this year. Until then, it’s too early to assume we have reached a sustainable market bottom.

Why Wal-Mart Could be Key

Before major overhead resistance levels are broken, major support levels in the indices — as well as in influential constituent stocks — are typically tested and hold, demonstrating increasing investor demand. 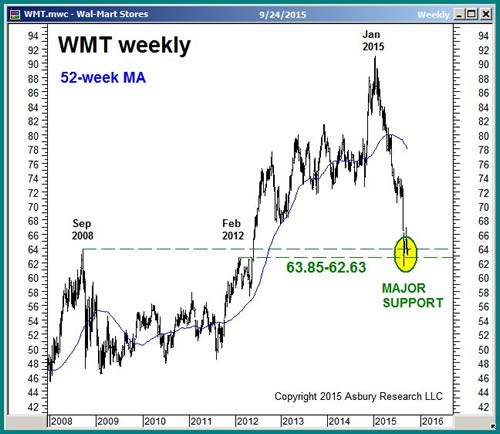 WMT is the 14th largest U.S.-traded stock by market capitalization and is positively correlated to the blue-chip Dow Jones Industrial Average. Therefore, I would view a rise over the next week or two from this band of support as an indication that an intermediate-term bottom may be emerging in the U.S. market.

Editor’s note: In just 90 seconds, you can learn how to collect up to $ 3,000 a month from an income “loophole” using stocks already in your portfolio — including blue chips like WMT. This is money you receive on top of dividends and capital gains. In fact, you could collect a few hundred extra dollars this week if you act now. Click here to watch.

Below is an updated version of the S&P Volatility Index (VIX) chart that appeared in last week’s report; it is too important right now to not include again.

Periods of elevated volatility historically coincide with declines in the S&P 500 because they indicate investors are collectively too fearful to initiate new long positions in the stock market. 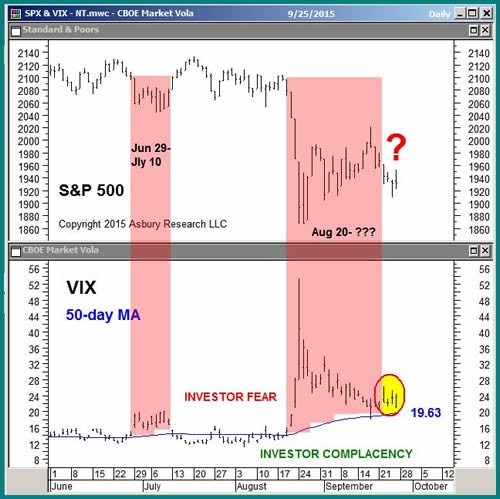 The red highlights point out that periods when the VIX has been above its 50-day moving average have coincided with periods of weakness in the S&P 500, most recently since Aug. 20.

It would take a sustained decline back below this moving average, currently situated at 19.63, to indicate investors are collectively complacent enough to start accumulating long positions again. Ideally, this will take place at major support levels like the one shown in WMT above.

Gold prices have spent the past two months trying to establish a bottom near $ 1,100 an ounce. As I’ve mentioned before, this level appears to represent value for “smart money” commercial hedgers, according to recent asset flow data.

In the Sept. 14 Market Outlook, I discussed the most recent failed rally attempt in gold. I said, “Readers should consider moving to the sidelines until investor assets start coming back into the market on a sustained basis.”

Investors made another attempt to buy gold late last week. 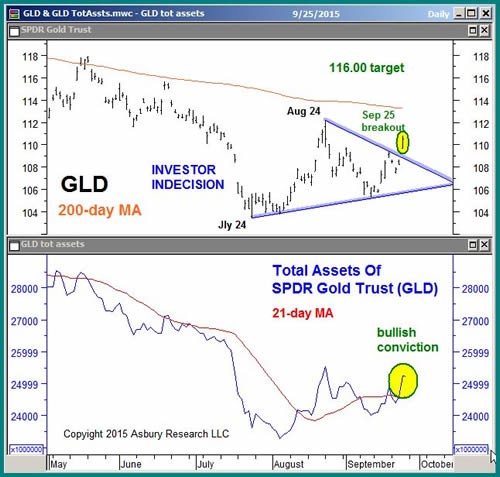 The lower panel of the chart plots the total net assets invested in SPDR Gold Shares (NYSE: GLD) with the 21-day moving average, which allows us to identify a monthly trend of expansion or contraction. These assets aggressively moved back above this moving average on Thursday and Friday, indicating near-term bullish conviction that prices will continue higher this week.

In addition, the upper panel shows this recent inflow of assets has pushed GLD above two months of sideways investor indecision. This constitutes a minor bullish breakout and targets a move to $ 116, which is 5.6% above Friday’s close and will remain valid above the Sept. 22 low of $ 107.44.

Unless the U.S. stock market is in the early stages of a bear market — which I don’t believe is the case — conditions are currently favorable, if not ideal, for it to begin a year-end rally within the next few weeks.

For a rally to materialize, however, three things have to happen:

3. The Nasdaq 100 must rise and remain above major overhead resistance at 4,385.