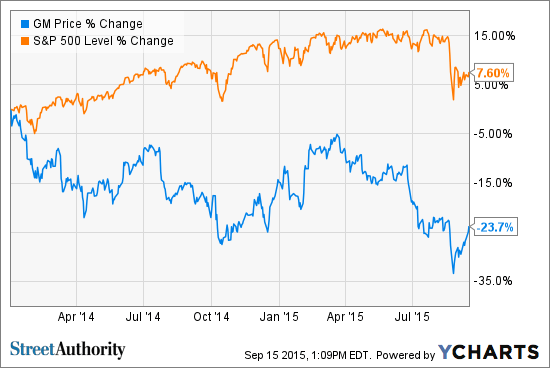 Buy This American Icon At A Massive Discount

“Talk to me when it’s timely.” That’s a response I often heard when pitching my best sell-side ideas to my firm’s hedge fund money manager clients. Most fund managers want to hear about a stock idea only when it is on the cusp of a big upward move. Lacking such imminent catalysts, a stock can languish for an extended period.

Yet value-oriented fund managers take a completely different view. They love to find stocks that offer deep intrinsic value, and they are willing to be patient and wait for an unloved stock to morph into a loved one.

And right now, perhaps no other blue chip is so unloved — and holds such deep value — as General Motors (NYSE: GM). By a whole host of metrics, shares of this auto maker are a stunning bargain. And for investors that have a 1-2 year time horizon, robust gains can be had. Equally important: shares offer such deep value right now, that they are very likely to stand their ground if the market tumbles further.

Recent Setbacks Have Hurt GM’s Share Price
General Motors has recently been beset by a series of setbacks, some of them self-inflicted. For example, in the summer of 2014, management told investors that the auto maker needed to sharply hike capital spending to have a truly competitive global fleet of cars and trucks. Such spending sets the stage for GM to retain and perhaps build global market share — and long-term profits — but investors only seemed to care about the impact on near-term cash flow.

GM spent $ 11.9 billion on capital spending last year, the highest level in company history, by a significant margin. That led to nearly $ 5 billion in negative free cash flow last year, according to Thomson Reuters. With nearly $ 30 billion in cash in the bank, GM could well afford to absorb such a near-term cash drain.

Of course General Motors didn’t help its image by moving very slowly to acknowledge a fatal design flaw in the ignitions of its compact cars. That PR nightmare has also led to major legal settlements, though the perception and financial impacts of the event are starting to wane.

More recently, GM’s massive investments in China have turned sour. The company has spent billions to build a strong presence (and 14% market share) in what is now the world’s largest car market. Chinese consumers have sharply slowed their purchases new cars at the moment, waiting to see when the broader economy will stabilize. Make no mistake, GM’s China presence will be a major positive tailwind in coming years. But right now, it’s just one of the reasons that GM has lagged the rest of the market since January 2014.

These Moves Will Lift Shares
Despite those issues, GM is still delivering excellent financial results. The company earned a record $ 1.29 a share in the second quarter, nearly 20% ahead of consensus forecasts. And the company is on track to boost profits roughly 50% this year (to around $ 4.50 a share) and another 10% in 2016, to around $ 5 a share. Shares trade for just six times consensus 2016 profit forecasts.

That prodigious free cash flow, which can fuel massive share buybacks and dividends, explains why my colleague Nathan Slaughter recently added GM to StreetAuthority’s Total Yield model portfolio. In a recent issue of Total Yield, Nathan took note of GM’s 4.8% dividend yield as an initial enticement. But he added that “GM is returning more than twice as much cash via buybacks than through dividends.” The current $ 5 billion plan is slated to be completed by the end of 2016, but at the current pace, it will be finished well before then, at which time GM will likely embark another buyback program. In effect, management is in a hurry to shrink the share count while share prices are so low.

Risks To Consider: A sharp rebound in oil prices would crimp sales of GM’s highly-profitable trucks and SUVs. An economic recession would lead to a big drop off in car sales. Neither event appears on the horizon at the moment.

Action To Take: A P/E ratio of 6.0, a free cash flow yield that will approach 20%, a Total Yield in excess of 10% … these are the kind of metrics that deep value investors adore. General Motors has had a sullied recent history but is now a very well-run company with a proven commitment to shareholders in the form of robust dividends and buybacks. Own this American icon now, before the recent headwinds start to lift and investors start to find great appeal in this value stock.

Editor’s Note: Total Yield stocks have been shown to beat the market — even during the 2008 financial crisis and the dot-com bubble. They also serve as reliable income investments. To find out more about Total Yield investing, click here.