Is the Next Buying Opportunity Just Around the Corner?

All major U.S. indices finished roughly 2% to 3% lower last week as stocks gave back some of the gains from the prior week’s rebound following the deepest decline since October 2014. On the heels of a quick 11% collapse between Aug. 18 and Aug. 25, the S&P 500 now appears to be in the process of digesting those losses as it drifts into what may turn out to be the accumulation phase for a fourth-quarter advance.

All sectors of the S&P 500 closed in negative territory last week, led by utilities and health care. Utilities, which had been among the strongest sectors over the past three months, have really taken it on the chin in the past two weeks. This was due in large part to the late-August rebound in long-term U.S. interest rates. Investors shifted assets out of utilities and back into U.S. government bonds to take advantage of the higher yield while eliminating credit risk.

Later in this report, I’ll discuss how the typically prescient bond market is likely to become a leading indicator of stock market direction between now and year end.

In the previous two Market Outlook issues (Aug. 24 and Aug. 31), I discussed the potential for a fourth-quarter recovery in the stock market due to a number of positive economic factors. These include the lowest unemployment rate since April 2008, coming in at 5.1% for August, and this year’s solid, steady improvement in the housing sector.

Another compelling market factor that argues in favor of a year-end recovery is investor sentiment, which has recently shifted to historic negative extremes due to the current market decline.

One measure of investor sentiment is the ISE Sentiment Index, shown in the lower panel of the chart below. This measures opening long customer transactions (rather than market maker or institutional transaction) on the International Securities Exchange, as they are thought to be the best representation of pure market sentiment. 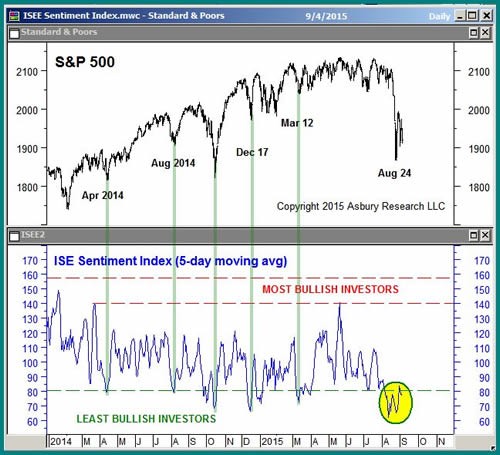 Currently, these retail trend followers are hovering at a bearish extreme (meaning more opening put options than call options) that has previously coincided with or closely led almost every near-term bottom in the S&P 500 since 2014.

As a contrary indicator, this metric suggests the market index is either at or near another similarly important bottom.

‘Tis the Season to Look for Opportunity

Another market factor that supports an emerging buying opportunity in U.S. equities is seasonality — i.e., statistical trends and patterns in the historical performance of an asset. This may provide a more precise indication of when a potential market bottom may emerge.

September is by far the seasonally weakest month of the year based on data since 1957. On average, the S&P 500 closes 0.69% lower for the month and has posted a negative monthly close 55% of the time.

The next chart breaks this seasonal pattern down further into a quarterly time frame via 13 weekly increments. It shows that the final week of September is by far the seasonally weakest of the third quarter. 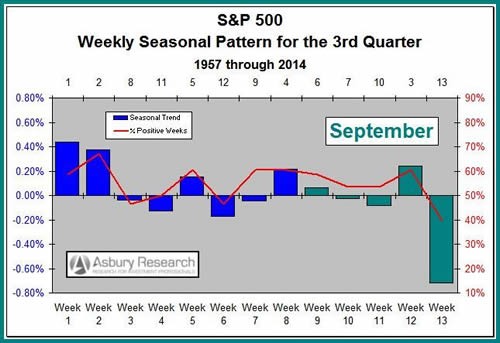 Taken together, this week’s first two charts not only corroborate but add significant detail to my overall positive assessment of the U.S. economy. They suggest the market is likely to put in an intermediate-term bottom at or near its current level sometime near the end of this month.

Editor’s note: Will you be ready when the buying opportunity emerges? Now could be the ideal time to explore a quantitative system that removes the emotion from buy and sell decisions. Traders who have followed the most accurate indicator in Profitable Trading’s history have made up to 212%. Click here to learn more.

Investors often watch long-term U.S. interest rates for clues to upcoming stock market direction. This is because the bond market is typically more forward looking and economically focused than the stock market, which tends to be obsessed with the latest news story or data point.

A good way to determine what the bond market is thinking is by watching the 2-year/10-year yield curve, which is simply the yield of the 2-year note subtracted from that of the 10-year note. A widening or steepening yield curve suggests that the bond market is pricing in economic strength or growth, while a flattening curve suggests market expectations for upcoming economic weakness or contraction.

The next chart shows this curve is currently in the midst of a major flattening trend, as defined by its position below the 200-day moving average. The early August flattening below the moving average preceded the collapse in equity prices by more than two weeks. And as long as it continues it will indirectly suggest more near-term weakness in stocks, perhaps into late September per the historical norm. 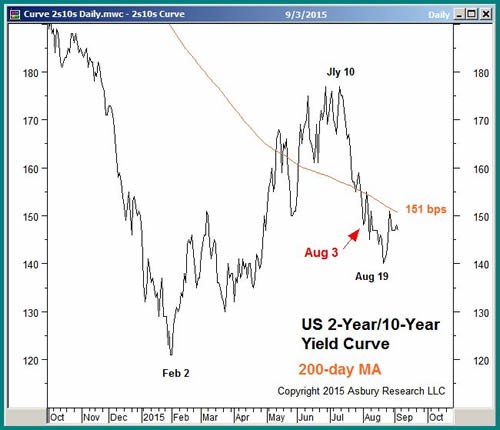 However, if and when the curve begins to steepen and move back above the 200-day moving average currently situated at 151 basis points, I’d view this as an indirect blessing by the bond market that the economic clouds are clearing and conditions are becoming more conducive to an end-of-year stock market recovery.

Two weeks ago, I pointed out that investor assets were expanding in SPDR Gold Shares (NYSE: GLD). I said that as long as this continued, gold prices were likely to continue their recent advance.

GLD’s rebound actually peaked on the day of that report (Aug. 24), as the ETF failed to rise above its 200-day moving average at $ 113.74. Total net assets invested have since contracted back to their 21-day moving average. This represents a near-term decision point from which the August trend of monthly expansion must immediately resume if still valid. 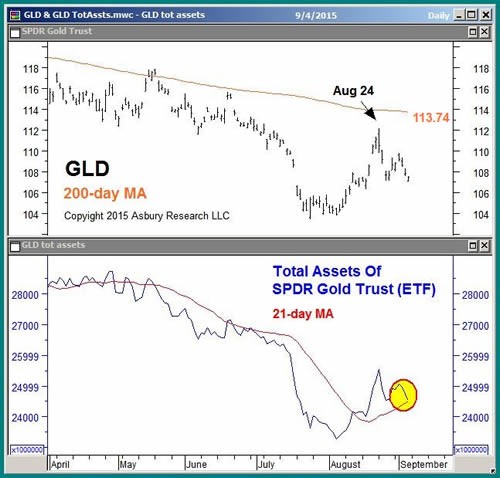 Conversely, I would view a contraction that drives these assets back below their moving average as evidence this relatively brief trend of expansion is over. In that case, we should look for the previous trend of contraction and declining gold prices to resume.

Recent flattening in the U.S. yield curve suggests that the typically prescient and forward-looking bond market still sees some economic potholes ahead, which warns that the stock market correction isn’t over yet.

However, current extremes in investor sentiment and 57 years of seasonality data suggest that we could see an investable intermediate-term stock market bottom emerge by the end of this month and potentially extend through year end. 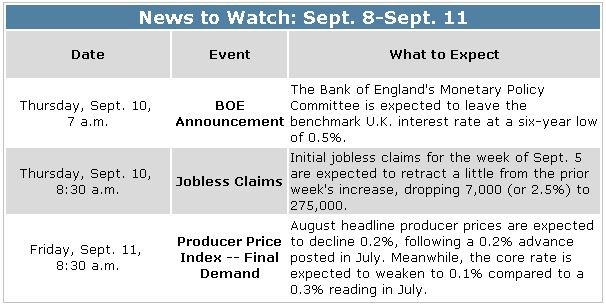