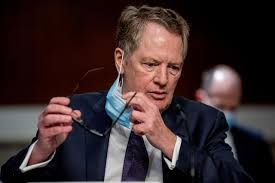 The Trump administration will push for a broad reset of “outdated tariff determinations” at the World Trade Organization to fix what it sees as years of unfair treatment of the United States, a top trade official told U.S. lawmakers on Wednesday.

U.S. Trade Representative Robert Lighthizer holds up a document titled “Economic and Trade Agreement Between the United States of America and the People’s Republic of China – Phase One” as he speaks at a Senate Finance Committee hearing on U.S. trade on Capitol Hill in Washington, D.C., U.S., June 17, 2020. Andrew Harnik/Pool via REUTERS TPX IMAGES OF THE DAY

U.S. Trade Representative Robert Lighthizer said the Geneva-based body was “a mess” and changes in the tariffs set by the Geneva-based WTO were urgently needed to better reflect current economic realities.

“Many countries with large and developed economies maintain very high bound tariff rates, far above those levied by the United States,” he said in prepared testimony for a hearing held by the U.S. House of Representatives Ways and Means Committee.

He said Washington would seek broader support for its proposals concerning notification enforcement and “special and differential treatment” for developing countries.

Lighthizer said the search for a new WTO leader could jumpstart reforms, but Washington would veto any candidate who had a “whiff of anti-Americanism” in their past. The current director general, Robert Azevedo, will leave his post a year early at the end of August.

The Trump administration has complained for years about the WTO’s failure to hold China accountable for unfair trade practices, and insists that China – the world’s second-largest economy – should no longer be treated as a developing country.

Lighthizer said the WTO and its Appellate Body had treated the United States as “the world’s greatest trade abuser” despite its large trade deficit, by finding the United States at fault in up to 90% of disputes filed before the trade organization.

Doing so had undermined the WTO’s negotiating process since countries now believed they could obtain better outcomes through litigation, he said.

Washington last year crippled the WTO’s ability to intervene in trade wars after blocking appointments to the Appellate Body, which rules on appeals in disputes. Lighthizer on Wednesday said it would be “fine” if the body never returned.

Lighthizer said the Trump administration also would continue to pursue formal challenges to practices of foreign countries that it believes violate WTO rules, such as the U.S. probe of digital services taxes announced on June 2.

He said the administration was also considering lowering the current $ 800 “de minimis threshold” up to which products can be shipped into the United States duty-free. The U.S. rate far exceeds that of its major trading partners, Lighthizer said.

He said the United States received a combined 1.2 billion de minimis shipments in fiscal years 2018 and 2019, of which 60% came from China, compared to just 68 million formal entries during the same period, of which less than 11% came from China.

“The disproportionately high volume of these shipments indicates China and others are likely exploiting the high U.S. de minimis threshold to avoid paying duties,” he said.