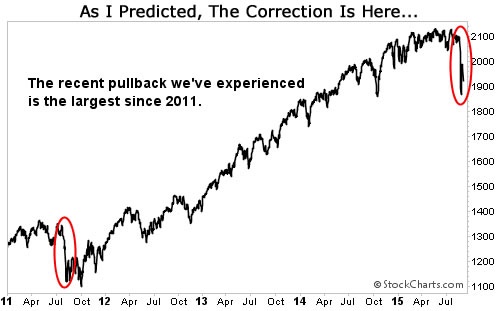 Warning: A Market Rebound is Likely to Fail

It’s amazing what a month and a double-digit percentage drop in the market can do to investors’ psyches. Just a few short weeks ago, my colleagues were nearly all-in bullish and balking at my predictions of a correction. Some even took on-air jabs at my bearish thesis while the market hit all-time highs.

Last month, I took a meeting with a few local fund managers to discuss market conditions and strategy. Many gloated about their year-to-date returns of 10% to 20%. If they only knew about the results subscribers to my premium options service, Profit Amplifier, are enjoying in 2015. So far this year, our closed trades have averaged an 18.4% return in 39 days.

I also warned my colleagues that a correction was imminent. I cautioned that their strategies did little to protect them from a sell-off of 10% or more. What they failed to acknowledge was that with each new market high, the chances of a volatile correction increased.

Needless to say, I’ve been flooded with calls and emails asking for my advice and help in the past two weeks. Unfortunately, buying flood insurance after a hurricane won’t do them much good.

In the past month, we’ve witnessed a slightly cautious market turn into a bearish feeding frenzy punctuated by the biggest intraday swing in the Dow’s history and the worst daily performance since August 2011.

Why a Major Bounce is Doomed

In my opinion, the pain is far from over. The psychological ramifications of the recent price action and the gravity of the underlying fundamentals have yet to fully sink in. This is shaping up to be one of the most volatile, unpredictable and difficult years for the market since 2011, when stocks closed flat but the VIX jumped 32% for the year.

In just a few short months, headlines have gone from predicting Dow 20,000 to Dow 5,000 and investor sentiment has quickly shifted from complacency to anxiety.

The odds of the S&P 500 dropping nearly 10% over a four-day period without one day of reprieve are roughly 1 in 2-3 million. After such a big move in one direction, contrarians would typically bet on a “reversion to the mean,” or a bounce in this case. But this swift and violent correction has unnerved the masses and caused many to rethink just how much risk they are willing to take in stocks.

Looking at the bigger picture, the bounce thesis looks even less convincing.

Comparatively, the bear market that accompanied the 18-month Great Recession between 2007 and 2009, the worst since the Great Depression, resulted in a 58% drop over 17 months, but we only saw a negative return in 2008.

Given the magnitude of the Great Recession, we should have seen a much bigger, longer pullback in the markets than we saw with the 2001 recession. I think the fact that we didn’t increases the probability of a deeper correction this time around.

Another reason I’m not sold on a bounce is that the underlying fundamentals do not support the sky-high stock prices and P/E ratios. In short, investors became extraordinarily bullish in recent years without real growth to back it.

While sales stagnated, companies used all of their tricks to boost earnings — share buybacks, mergers, cost cutting, etc. As I pointed out when I made my initial call for a correction, the only real avenues left to grow earnings without growing sales are layoffs or wage pressures — neither of which is good for our economy or stock prices.

This Correction is a Wake-Up Call

With revenue at S&P 500 companies expected to fall nearly 1% in 2015 against a backdrop of global growth concerns and rising U.S. interest rates, it seems logical investors would be rethinking their portfolio strategies. But they were in need of a wake-up call.

Now, I think it’s safe to say that the world didn’t dramatically change in the past couple of weeks. While data suggested deepening problems in China and the United States, the majority of market participants “knew” this already. But knowing and believing are two very different things. I believe the recent action in the market may have finally woken investors up to what’s going on and could set a larger decline in motion.

Profit From the Volatility

While the short-term outlook is murky, my bearish market thesis is unchanged. At the same time, my Profit Amplifier subscribers and I remain extremely positive. Volatility can be a wonderful thing if you know how to exploit it.

This year has yielded much different results for our service when compared to most investing strategies. My proprietary system, which seeks out long and short opportunities using options, has delivered stellar results in one of the toughest markets in years.

Like I mentioned, our average trade has generated 18.4% in just 39 days. That’s an amazing average annualized return of 172% per trade. The majority of my calls have been spot-on, including my warning of a market correction.

If you’ve never considered using options as a way to protect yourself and profit from a falling market, then now is a great time to start. I’ve put together a short presentation that explains how options work and how my Profit Amplifier readers and I have been able to achieve our record of success. To learn more, click here.