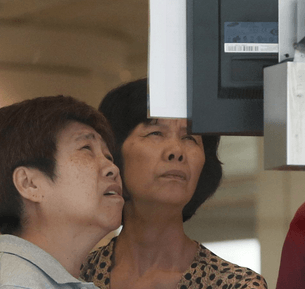 About a month ago, China ran into a small problem.

The country’s “world-beating” equity bubble – which has served as a wonderful distraction from China’s decelerating economy and bursting property bubble – suddenly collapsed.

Starting earlier this year and accelerating into June when the CDSC channelled its inner Ronald McDonald and cancelled the series, data out of China suggested that semi-literate farmers, housewives, and famously, banana vendors, were opening millions of new stock trading accounts each and every month.

Subsequently, analysts began to take a hard look at margin lending, which eventually rose to CNY2.2 trillion and touched a record 18% of the SHCOMP free float market cap on July 3. 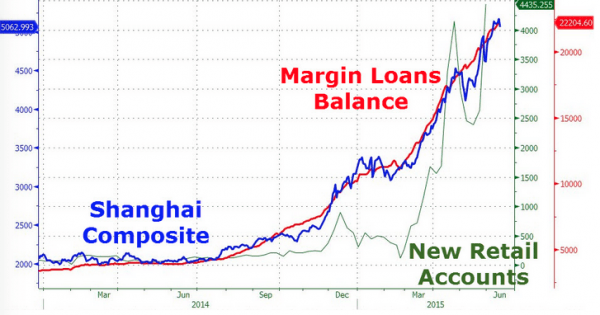 For the entire Chinese equity market, the margin lending as a percentage of free float figure was near 14% recently, and as you can see from the following, that is quite remarkable when compared to the US and Japan:

While that level of leverage is rather frightening in and of itself, the truly scary part of the story is that it only reflected the positions of traders who were ostensibly more sophisticated (if one can equate account balances with sophistication). That is, brokerages were only allowed to facilitate margin trading for investors whose account balances totalled at least CNY500K, and even then, traders could only lever up 2X. Behind the scenes however, a remarkable shadow margin lending system was thriving, as the country’s newly-minted day traders searched for ways around official margin restrictions.

Backdoor margin facilities included, famously, umbrella trusts and structured funds. Umbrella trusts were set up like a CDO. The senior tranches were marketed to depositors who were promised a fixed coupon – what they were not always aware of, was that their cash was then used to finance margin trading in the lower tranches. In short, depositors were sold a fixed income product that wasn’t a fixed income product.

The important point is that these backdoor margin channels funneled another CNY1 trillion into Chinese stocks and in April, China cracked down on brokerages’ ability to tap umbrella trusts – some now suggest restrictions on the shadow banking complex’s ability to finance leveraged equity trading was the beginning of the end for the equity mania.

Once the meltdown entered its second week, China scrambled to prop up the market, unleashing an eye-watering array of stimulus and support measures including rate cuts, liquidity injections, and, most famously, selling bans which stopped just short of threatening to execute anyone found to be engaged in “malicious” activities. 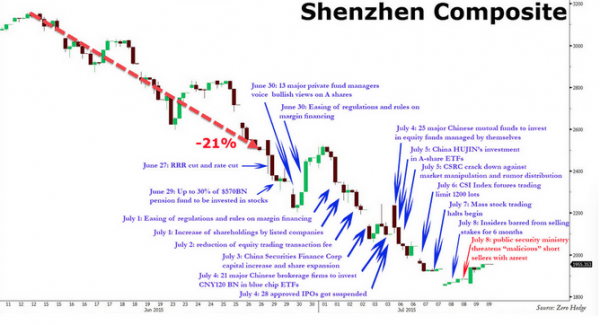 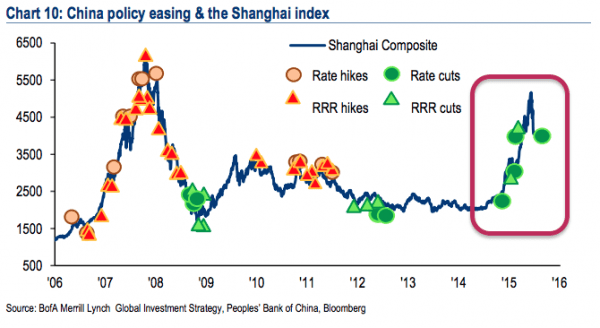 So far, none of the measures have provided a sustainable solution and now, traders around the world watch the China open as though it were a SpaceX rocket launch – that is, there will be ignition, the only question is whether it will be in orbit in five minutes or whether it will explode in mid-air.

And while everyone focuses on the admittedly hilarious idea that the Chinese government may actually prosecute bears, the only real way to support stocks when halting half the market and making it illegal for major shareholders to sell has failed, is to go full-Kuroda, which is effectively what the PBoC did when it announced it would provide funding for China Securities Finance.

As a reminder, two weeks ago the PBoC said it was set to inject capital into China Securities Finance Corp., which is effectively a subsidiary of the China Securities Regulatory Commission. “China’s central bank is now underwriting brokerages’ margin lending businesses,” we said, before driving the point home with this: “The PBoC is now in the business of financing leveraged stock buying.”

Since then, the plunge protection funds channeled through the CSF have ballooned and on Friday, China’s commercial banks agreed to lend another CNY209 billion to the margin finance vehicle. Here’s Reuters:

Financial magazine Caijing cited unnamed sources as saying that 17 commercial Chinese banks had coughed up the cash for China Securities Finance Corp as of Monday, after China’s central bank said it wanted to extend funding to the firm.

China Securities Finance is the only institution that provides margin financing loan services to Chinese securities firms, and is seen as an important conduit for the government to counter stock market volatility.

And Bloomberg has more on just how large the CSF plunge protection project has become:

China has created what amounts to a state-run margin trader with $ 483 billion of firepower, its latest effort to end a stock-market rout that threatens to drag down economic growth and erode confidence in President Xi Jinping’s government. 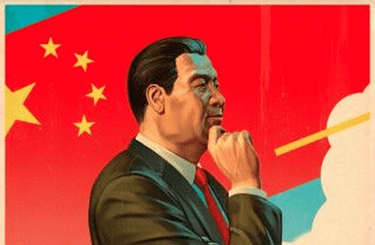 China Securities Finance Corp. can access as much as 3 trillion yuan of borrowed funds from sources including the central bank and commercial lenders, according to people familiar with the matter. The money may be used to buy shares and provide liquidity to brokerages, the people said, asking not to be named because the information wasn’t public.

While it’s unclear how much CSF will ultimately deploy into China’s $ 6.6 trillion equity market, the financing is up to 25 times bigger than the market support fund started by Chinese brokerages earlier this month. That’s probably enough to restore confidence among China’s 90 million individual investors, says Bocom International Holdings Co. The Shanghai Composite Index jumped 3.5 percent on Friday, capping a two-week rally that’s turned it into one of the world’s best-performing equity gauges.

CSF, founded in 2011 to provide funding to the margin-trading businesses of Chinese brokerages, has transformed into one of the key government vehicles to combat a 32 percent selloff in the Shanghai Composite from mid-June through July 8.

At 3 trillion yuan, its funding would be about five times bigger than the new proposed bailout for Greece and exceed China’s 2.3 trillion yuan of regulated margin financing during the height of the stock-market boom last month.

It would be impossible to overstate the significance of the latter point there. If it chooses, China’s state-controlled margin lender has the capacity to fund five Greek bailouts worth of leveraged stock buying through Chinese brokerages.

More poignantly, the CSF has enough funding to double the margin loan balance that existed in the market at its peak and that includes all of margin loans that were extended through China’s network of backdoor lending channels.

Why is it necessary for China to create a half-trillion dollar state-controlled margin trading Frankenstein?

Two words: social stability (more here). Because the psychological effects of watching trillions in margin-fueled paper gains vanish into thin air are hard to predict, and just about the last thing China needs as it tries to transition its economy into a services and consumer-driven model is a popular uprising.