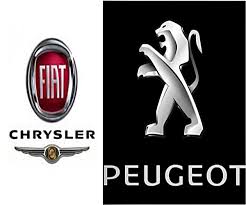 Fiat Chrysler and Peugeot in talks over $50 billion tie-up

– Talks between Fiat Chrysler (FCHA.MI) and Peugeot owner PSA (PEUP.PA) over a potential tie-up that could create a $ 50 billion (£39 billion) car giant gathered pace on Wednesday, with one source saying a deal could be announced as early as Thursday.

The two groups said in separate statements they were holding discussions aimed at creating one of the world’s leading auto makers, better placed to tackle a host of costly technological and regulatory challenges facing the global auto industry.

The companies have each called unscheduled board meetings on Wednesday to discuss the potential deal, people close to the matter said, while one source familiar with the discussions said an agreement could be announced as soon as Thursday.

Spokespeople for Fiat Chrysler Automobiles (FCA) and PSA declined to comment on a timeline.

Milan-listed shares in FCA rallied more than 10% on Wednesday, after ending up more than 7.5% on Tuesday in New York. Peugeot share rose more than 6% to hit their highest in more than 11 years.

The merged entity would still face substantial challenges, as auto manufacturers grapple with a global downturn in demand while trying to develop costly, cleaner car models as deadlines to meet ever more stringent anti-pollution rules loom.

And a combination of PSA and FCA would first have to overcome a series of political, financial and governance hurdles, though it elicited an encouraging early response from the French government, a key PSA shareholder.

France’s dithering over FCA’s pursuit of Renault – where it is also a shareholder, but was keen for the French carmaker to first resolve its tensions with existing partner Nissan – contributed to the collapse of that merger plan.

French government spokeswoman Sibeth Ndiaye said Paris was following the PSA-FCA talks closely with an eye on the fallout for jobs, but added an enlarged group was ultimately “the best path to protecting employment.”

The tie-up would leave France with two major players in the global industry, as opposed to the Renault-FCA-Nissan configuration, which left PSA trailing.

“We view the combination of these two companies as reasonable given global competition, high capital intensity, and industry disruption from electrified powertrain as well as autonomous technologies,” Hilgert said.

Italy’s Industry Minister Stefano Patuanelli said on Wednesday that Rome – which has no stake in FCA – was following talks between the two groups, but declined to comment further on a “market operation”.

Rome is keen to avoid major job losses in Italy, where 58,000 workers are employed by FCA, and with most of its Italian plants heavily underused. Italian trade union FIOM said it was concerned a tie-up with PSA could hit jobs in the country even more than a Renault merger.

British unions, meanwhile, flagged their worries for PSA plants in the United Kingdom, where it makes vehicles under the Vauxhall and Opel brands.

Closing factories is politically problematic, but carmakers can glean savings by combining vehicle platforms and plants, pooling research and development efforts and increasing economies of scale in procurement.

In addition to the French government’s 12% shareholding in PSA, held via state bank BPI, the Peugeot family and the Chinese government, through Dongfeng Group, each have a similar holding.

Dongfeng could use a merger deal to cash out of PSA, two sources close to the talks said. Dongfeng declined to comment. Speculation it was looking for an exit surfaced in August.

If Dongfeng did stay on board, the Chinese presence might trigger doubts in the United States over a potential merger, as trade tensions between Washington and Beijing remain high.

FCA, which lacks adequate green technology, has agreed to pay Tesla hundreds of millions of euros to pool emissions credits in an effort to escape penalties.

It has also announced a 5-billion-euro investment plan in Italy to 2021, to help the group launch its first electric and hybrid models, revamp luxury brand Maserati and fill capacity at its Italian plants.

But a combination with Peugeot would give the carmaker access to PSA’s CMP modular platform, which has already spawned the Peugeot e-208 and the Opel Corsa-e mini.

Investors have speculated for years that FCA – itself the product of an Italian-U.S. merger – was hunting for a further partner, encouraged by the rhetoric of the company’s late chief executive Sergio Marchionne.

FCA, controlled by Exor (EXOR.MI), the holding company of Italy’s Agnelli family, had discussed a combination with PSA earlier this year, before it proposed a $ 35 billion merger with Renault.

At that time, FCA said a deal with Renault offered more advantages than a combination with PSA, but Elkann, a scion of the Agnelli family, broke off talks after the French government’s intervention.

Max Warburton, an analyst at Bernstein, said the combination of FCA and PSA had more logic and greater chance of success than the previously attempted FCA-Renault deal, but said PSA offered few synergies in the United States, Latin America and China. “The focus will be Europe,” he said.