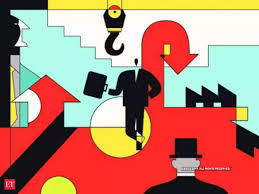 India Sept factory growth steady from Aug, but still weakest in over a year

The Nikkei Manufacturing Purchasing Managers’ Index, compiled by IHS Markit, was 51.4 in September, unchanged from August.

While it has been above the 50-mark that separates growth from contraction for over two years, the growth rate in September and August was the slowest since May 2018.

Worryingly for the government and policymakers, overall demand only rose marginally in September, hurt by almost no growth in exports, and firms barely increased headcount last month, the survey showed.

Factories also cut back on purchases of raw materials, indicating they do not expect a marked pick up in demand.

India’s economy expanded at an annual rate of 5.0% in the April-June quarter, the slowest in more than six years, official data showed in August, and the government has announced several measures to try and revive growth.

With overall inflation set to remain below the Reserve Bank of India’s medium-term target of 4% in the coming months, the RBI is widely expected to cut rates at its October 4 monetary policy review, adding to the 110 basis points of cuts already delivered this year.

“In light of the weak results for economic growth and muted inflationary pressures signalled by the PMI data, we expect to see further monetary easing in the months ahead,” Pollyanna De Lima, principal economist at IHS Markit, said in a release.

Still, despite the expected easing from the RBI and measures announced by the government to boost the economy, optimism among firms remained weak. The sub-index measuring the outlook for the next 12 months is the second lowest in over two years.