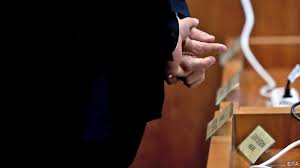 OCCASIONALLY MARTIN SHIELDS slips into the jargon of financial markets: OTC (over-the-counter), for trades between banks and private customers); kd-1-11, a code for payments, which confuses his translator. But on September 18th, the first of two days’ testimony at a court in Bonn, the British investment banker does his best, with slides and a laser pointer, to explain to the judge the complexities of dividend arbitrage in general and “cum-ex” deals in particular. Even the most basic cum-ex deal, he says, involves 12 steps and a web of bankers, brokers, investors, asset managers, lawyers and consultants.

Mr Shields and Nicholas Diable, another British banker, are the main defendants in Germany’s biggest post-war tax-fraud trial. They are accused of “aggravated tax evasion” for helping engineer 33 deals that cost taxpayers almost €450m ($ 494m) between 2006 and 2011. The charge sheet runs to 651 pages. Cum-ex trades are share transactions done at high speed on or just before the day dividend payments are recorded. Before payment, shares come with (cum) dividends, which are reflected in their prices; after, they come without (ex). A flurry of deals may allow two or more investors to reclaim tax on dividends, even though it has been paid just once.