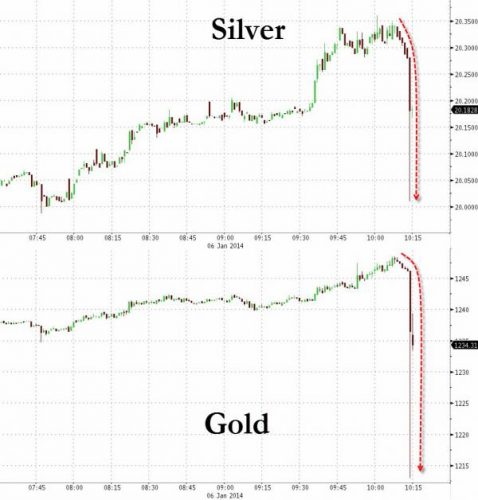 Back in late 2013 and  early 2014, the gold (and silver) market was stunned by a series of massive, unprecedented “stop” or “velocity logic” sales which sent the price of the precious metal crashing so furiously they halted the entire gold futures market anywhere between 10 and 20 seconds.  Some examples:

Some said this was nothing but a fat finger, but we together with Nanex showed this was clearly a premeditated attempt to reprice gold lower, facilitated by that oldest trick in the HFT book: quote stuffing.

As a reminder, only recently did regulators finally realize just how manipulated the gold market is when in early May, after a Zero Hedge postexplicitly showed just how “someone” was spoofing gold, both the CME and the CFTC cracked down on the manipulator. However the moves that had seen regulatory intervention were paltry and largely irrelevant in the grand scheme of gold “price discovery.”

In Notice of Disciplinary action, COMEX 14-9807-BC, the CME charged Mirus Futures, which one year ago was bought by NinjaTrader with “disruptive and rapid price movement in the February 2014 Gold Futures market” which prompted the abovementioned Velocity Logic event which halted the market for ten seconds.

Pursuant to an offer of settlement Mirus Futures LLC (“Mirus” or the “Firm”) presented at a hearing on June 16, 2015, in which Mirus neither admitted nor denied the rule violations upon which the penalty is based, a Panel of the COMEX Business Conduct Committee (“BCC”) found that it had jurisdiction over Mirus pursuant to Exchange Rule 418 and that on January 6, 2014, Mirus failed to adequately monitor the operation of its trading platform (Zenfire), and connectivity of its trading system (Zenfire) with Globex. This failure resulted in unusually large and atypical trading activity by several of the Firm’s customers and caused the mass entry of order messages by Zenfire, which resulted in a disruptive and rapid price movement in the February 2014 Gold Futures market and prompted a Velocity Logic event.

The Panel found that as a result, Mirus violated Rules 432.Q. (Conduct Detrimental to the Exchange) and 432.W. (Failure to Supervise).

This is the “anomalous”, market-manipulative event in question, which curiously also promptly dragged down silver even though the CME only alleges gold manipulation. Almost as if correlation algos need no actual reason to buy or sell aside from, well, what the other pair in the correlation does.

The volume in this dump was massive: 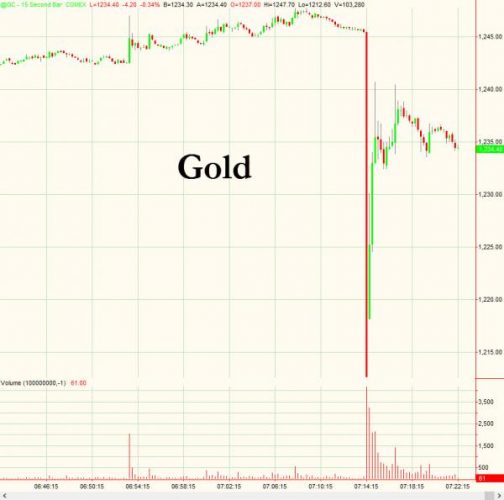 The correlated “safety asset” move even succeeded in pushing bitcoin, which then was trading just over $ 1000, down into the triple digits. 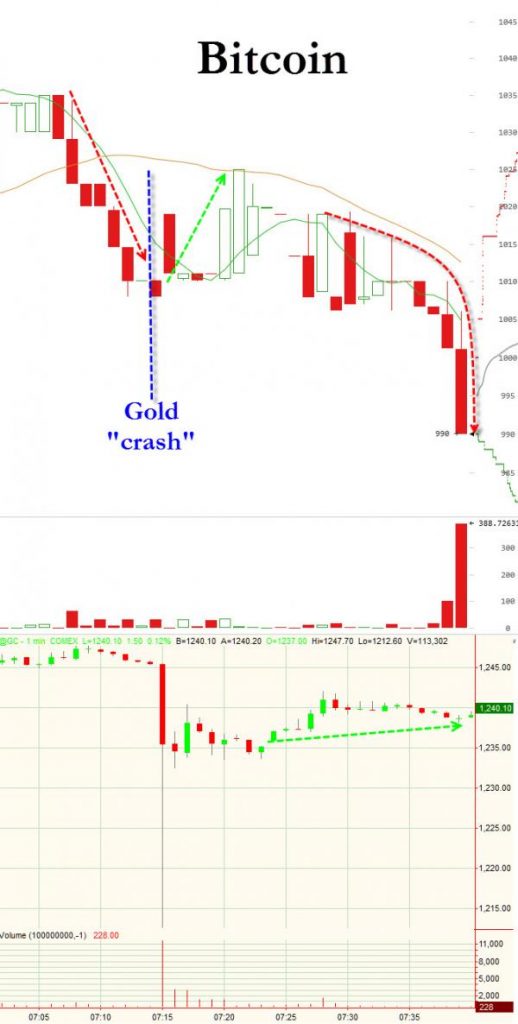 That this was yet another HFT market-rigging event was also known. This is how Nanex described the millisecond-level landscape back then:

The chart below shows the entire $ 30 drop in the price of Gold futures that occurred in just under 100 milliseconds (1/10th of a second). When we separated groups of trades by a jump in the exchange sequence number (a technique to determine the size of a larger order) we discovered there were 9 groups where the sum of the trade sizes was exactly 338 contracts! Each group is composed of widely different numbers of trades: the first group of 338 contracts is made up of 211 trades, the second group is made up of 186 trades, and 3rd-9th: 120, 193, 97, 193, 137, 112 and 109 trades respectively. We show these 9 groups in the chart below. What’s more, there are other trades occurring between these groups of 338 contracts.

This was not the result of a fat finger, but rather the work of a high frequency trading algorithm that paused, and (probably) tested the market before continuing. A fat finger would not have such distinguishing features. What is disturbing about this algorithm, is that it carefully waited so as not to trip the CME’s stop logic and halt the stock. The halt was from the more lenient volatility circuit breaker after the price declined $ 30 in less than a second. This algo appears to have been more concerned about preventing an immediate halt, rather than getting the best prices. Since the value of the trades was close to $ 500 million, there aren’t a lot of suspects. Add to this, the fact they didn’t get “special treatment” and have the trades busted, or the price adjusted (which is what happened with the Treasury Futures debacle just 2 short weeks before this event).

The futures move promptly spilled over into spot and ETFs:

The punishment for the manipulators with the “faulty” trading platform?

So Nav Sarao may spend 380 years in jail for spoofing the S&P lower, but some bucket prop trading shop executing some “unknown” client’s orders gets away with $ 200K. Brilliant.

In any event, with an 18 month delay we finally know precisely who caused the January 6, 2014 gold flash crash: something the CME could have revealed the very next day, and yet it chose to keep quiet.

Here is what we don’t know:

Because while the CME accuses Mirus’ then trading platform “Zenfire”, since made obsolete, for the glitch, it also says that Mirus failure “resulted in unusually large and atypical trading activity by several of the Firm’s customers.”

So was the failure in the trading platform or, as the CME also alleges, the failure was the result of “atypical trading activity” whose sole intention was almost certainly to cause a cascading avalanche of sell orders which pushed gold by $ 30 lower, rebounding just 50% of the way in the other direction once the selling pressure subsided, what is know in the industry as “repricing” an asset, in this case due to fraud which the CME chooses to call a “glitch.”

Some “price discovery” – if a “failure” can take an “efficient” price and chop off nearly 2% from it for absolutely no reason.

Alas, we won’t find out.

First Mirus no longer exists: one year ago it was acquired by NinjaTrader, Zenfire was deactivated, and any and all traders complicit in the gold manipulation scheme have long since gone on to bigger and better manipulating venues.

Second, as one furious reader finally blew up and asked then CFTC “regulator” and now HFT lobbyist, Bart Chilton what the hell is going on,only to find out that the US commodity regulator had other more pressing concerns at the time – and every time – than running fair and functioning markets:

No regulators looking at markets due to government shut down.

NOTE: Ponzimonium: How Scam Artists are Ripping Off America, is now available in a FREE EBOOK edition. Go to the link for your copy and a Government Book Talk interview: http://govbooktalk.gpo.gov/2013/09/03/post-ponzimonium-an-interview-from…
* * *

Any comment on this morning’s shenanagins in the gold and silver pits?  Time to reopen an investigation?
Is credibility important to the CFTC?

In retrospect, Bart Chilton’s “book” explaining “How Scam Artists are Ripping Off America” was clearly based on his own personal experience.

As for gold, it will remain manipulated and viciously slammed until such time as the suppressed price can be allowed to recover its fair value, which will only happen once those who are accumulating massive amount of physical have their fill. In the meantime, if you can’t beat them may as well join them, as long as physical gold continues to be quite explicitly “on sale.”