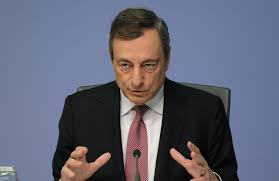 The European Central Bank’s ‘Bazooka’ is Back. This Time, There’s Less of a Bang

the policy that dragged the world out of the Great Recession—is back, but it’s a shadow of its former self.

On Thursday, the ECB became the first of the world’s major central banks to fire up the money-printing presses in response to the global slowdown triggered by the U.S.-China trade conflict. The last round of easing began in 2015, and came to be known as ECB President Mario Draghi’s monetary policy “Bazooka”. The program only formally ended in December of last year.

The bank also cut its key deposit rate to a new record low of -0.5% and announced a handful of measures designed to keep creaky Eurozone banks from collapsing as ever-lower interest rates—rates are now negative across most of the euro zone—suffocate their businesses. Meanwhile, growth slowed to a meager 0.2% in the second quarter, and the currency union is largest economy, Germany, is on the verge of recession.

However, the package’s impact on financial markets was muted, coming across as half-hearted—a reflection of what appeared to be significant internal resistance against the program—although it leaves room for incoming President Christine Lagarde to make her mark by adding to it after she takes over from the outgoing Mario Draghi in November.

Quantitative easing, or QE, is a policy where a central bank creates money to buy bonds, increasing the money supply and depressing market interest rates, with the hope that it will stimulate demand.

The Frankfurt-based bank said it will start the practice again in November at a rate of 20 billion euros ($ 22 billion) a month. That’s only a quarter of what its previous QE program peaked at in 2016, before tapering to zero at the end of last year. However, in contrast to the first program, the ECB said the new one would be open-ended, carrying on for as long as necessary for inflation to get back to its medium-term target of just under 2%.

That could take some time. The bank cut its forecasts for inflation over the next two and a half years on Thursday, and now expects it to rise to only 1.5% by 2021.

The package creates quite a conundrum for the Federal Reserve, when its own policy-making committee meets next Tuesday and Wednesday.

Krpata said he expects the dollar to strengthen against the euro through the end of the year, settling into a range between $ 1.05 and $ 1.10. At its current level of $ 1.1073, the euro has already lost 5.3% of its value against the dollar over the last 12 months.

That’s red rag to a bull in the White House. On Thursday, U.S. President Donald Trump tweeted that ECB Chief Mario Draghi and his colleagues “are trying, and succeeding, in depreciating the Euro against the VERY strong Dollar, hurting U.S. exports.”

Trump then renewed his attacks on the Fed’s refusal to cut interest rates more aggressively, arguing that the eurozone government “get paid to borrow money, while we are paying interest!”

Things weren’t made any easier for Jerome Powell’s cohorts by conflicting media reports suggesting, then denying, that the Trump administration is preparing a temporary trade truce with China. Powell has argued that trade uncertainty is one of the biggest drags on the U.S. economy right now, and removing that uncertainty would both support the economy and, by logical extension, reduce the need for further U.S. rate cuts.

The Europeans, of course, see it all differently. Confronted in real time during his press conference with Trump’s tweet, Draghi fell back on the ECB’s old and well-loved line that “we have a mandate: we pursue price stability and we don’t target exchange rates.” When asked about the possibility of U.S. intervention to weaken the dollar, he warned implicitly that Trump would be taking on the whole world, noting that the “G20 consensus” was still firmly against competitive devaluations.

But the ECB’s target audience for its measures was not Washington, but rather eurozone governments. Glossing over internal differences over whether to restart quantitative easing, Draghi said that “there was unanimity that fiscal policy should become the main instrument” in supporting the economy. In a thinly veiled jab at the German government, which this week outlined plans for yet another balanced budget, he pointed out that a number of German research institutes are saying the country is already sliding into recession, and called the faltering at Europe’s economic powerhouse “a case for timely and effective action.”

Without help from higher government spending, the ECB’s action is unlikely to achieve much, Berenberg Bank chief economist Holger Schmieding said in a research note. However, he noted, “waiting for a big fiscal boost would have been like waiting for Godot.”

“Doing nothing in the face of a significant economic slowdown would also have entailed risks,” he added.