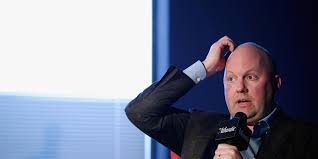 Inside the Private Meeting of Top Crypto Investors and Government Officials

Silicon Valley pretended for years that it was uninterested in the goings-on in Washington and other centers of government power. This was nonsense. The tech industry began by catering to the defense industry, the Internet grew out of a government project, and companies from Oracle (early customer: the CIA) to Tesla (government subsidies juiced sales) have been sucking from the public teat ever since.

Andreessen Horowitz, the savviest and most brazen venture capital firm on Sand Hill Road, understands this history well. In May, just before Facebook released the blueprint for its Andreessen Horowitz-supported Libra cryptocurrency, the venture firm held its “inaugural” Crypto Regulatory Summit in California. The event was a private, off-the-record affair at which entrepreneurs talked about what “crypto” is and then government officials discussed how they plan to regulate it.

The existence of the hush-hush affair stayed quiet until The Wall Street Journal caught wind of it and published this revealing account on Sunday. Two days earlier, Andreessen Horowitz, which hadn’t previously said a word about its conclave, posted six audio recordings of the proceedings, none of which were from the government officials in attendance. (A firm spokeswoman says it plans to release recordings of all the sessions, pending approval from the speakers, adding: “We were just slow to get it up.”)

Andreessen Horowitz surely did nothing wrong and I’m told the government officials received permission to attend what’s known as a “widely attended gathering.” (Attendees included J. Christopher Giancarlo, chairman at the time of the Commodity Futures Trading Commission; Sigal Mandelker, undersecretary of the Treasury for terrorism and financial intelligence; Rostin Behnam, a CFTC commissioner; William Hinman, director of the Securities and Exchange Commission’s division of corporate finance; Kim Berger, head of the New York Attorney General’s bureau of Internet and technology; and William Frentzen, chief of the corporate fraud strike force in the U.S. Attorney’s office for Northern California.)

Nevertheless, it took journalistic sleuthing for the substance of this meeting to be revealed. (One attendee, the lawyer Katherine Wu, who has since joined a venture capital firm, had posted this contemporaneous tweet.) And until Andreessen Horowitz posts more podcasts, we still don’t know what the officials who work for us told their hosts and other guests last spring.

Speaking of government and journalism, three quick items of interest: 1) San Franciscans should be infuriated to learn, thanks to The San Francisco Chronicle’s Heather Knight, that as traffic enforcement has gone down, pedestrian and cyclist deaths have gone up. 2) Congratulations (and thank you) to Brainstorm Tech stalwarts Roy Bahat (of Bloomberg Beta) and Peter Schwartz (of Salesforce) for their appointments to California Gov. Gavin Newsom’s new Future of Work Commission. 3) If you never saw the Brainstorm Tech town hall on regulation from July, Marketplace Radio, whose Kai Ryssdal hosted the session, posted this nine-minute compendium.

Bend and snap. The delayed folding smartphone from Samsung is finally ready to be released, the company says. Originally announced in February for an April sale date, the nearly $ 2,000 Galaxy Fold now will go on sale in Korea on Friday, followed by sales in the United States, France, Germany, and other countries in coming weeks. Samsung said it fixed reliability problems with the phone’s screen and hinge, among other improvements.

Learning from our mistakes. Government intel officials met with execs from Twitter, Microsoft, Facebook, and Google on Wednesday to discuss security around the 2020 presidential election, Bloomberg reports. Nathaniel Gleicher, Facebook’s head of cybersecurity policy, led the meeting, which took place at the company’s headquarters. Of course, security really should start at home. A researcher found an unprotected online database containing over 400 million Facebook users’ phone numbers. Facebook said the data had been scraped from profiles before the company had restricted the info.

Less hot. On Wall Street, Slack Technologies disappointed despite reporting revenue for its latest quarter rose 58% to $ 145 million. The problem was a lower-than-expected growth forecast for next quarter of 46% to 48%. Slack’s shares, which had gained 20% since it went public in July, lost 12% in pre-market trading on Thursday. In other bad news for bankers, online clothing reseller Poshmark delayed its IPO until next year. In better news, aging insurance outfit Prudential Financial is laying out $ 2.4 billion for online insurance startup Assurance IQ. Oh, and a little outfit in Cupertino called Apple borrowed $ 7 billion by issuing bonds at super-low interest rates (under 3%).

Room with a view. As it heads for Wall Street, the company formerly known as WeWork, aka the controversial real estate and/or tech startup the We Company, is cleaning up a few issues. We said Wednesday it added its first female director, putting Harvard biz school professor (and former Uber exec) Frances Frei on its board of directors. We also said CEO Adam Neumann returned the $ 6 million he received in the absurd transaction to license the company’s new name.

Stop digging. Following up last week’s coverage of the grotesque Jeffrey Epstein scandal intersecting with tech via his donations to MIT’s Media Lab, lab founder Nicholas Negroponte had a few things to say. They weren’t very reassuring, though. Negroponte said he urged current lab director Joi Ito to take Epstein’s money. “If you wind back the clock,” he added, according to MIT’s own Technology Review publication. “I would still say, ‘Take it.’”

How much is that doggy in the window. Porsche did indeed unveil its first electric model on Wednesday, the four-door Taycan. But the starting sticker price was a little higher than our early reports indicated: $ 152,250.

Bringing you one of the more frightening editions of “Food for Thought,” today we ponder the possibilities of fully computer-controlled weapons systems. Hello, Skynet. The Marines have been testing a program called Sea Mob that could eventually put autonomous boats with machine guns at sea, Zachary Fryer-Biggs reports for The Atlantic, while the Air Force is working on a pilotless F-16 jet called SkyBorg. What happens next:

The key remaining issue is whether military commanders will let robots decide to kill, particularly at moments when communication links have been disrupted—a likely occurrence in wartime. So far, new weapons systems are being designed so that humans must still approve the unleashing of their lethal violence, but only minor modifications would be needed to allow them to act without human input. Pentagon rules, put in place during the Obama administration, don’t prohibit giving computers the authority to make lethal decisions; they only require more careful review of the designs by senior officials. And so officials in the military services have begun the thorny, existential work of discussing how and when and under what circumstances they will let machines decide to kill.

IN CASE YOU MISSED IT

Robots and Better Business Models: How the World’s Growing Population Can Learn to Feed Itself By Fortune Editors

A $ 170 Million Joke: Why the FTC’s ‘Record’ YouTube Fine for Collecting Kids’ Data Won’t Change Anything By Jeff John Roberts

Android 10 Has Been Released. These Are Its 7 Most Anticipated New Features By David Z. Morris

The 15 Most Popular Side Hustles Now By Anne Fisher

Traditional artworks–paintings, sculptures, jewelry, etc.–are displayed in traditional museums everywhere. Digital works of art don’t have the same ubiquity. Now a digitally-oriented gallery called Artechouse is opening a permanent display space in New York City in the basement of Chelsea Market. The 6,000-square-foot gallery, equipped with high-tech screens and sound gear, will open on Friday with works by Turkish artist Refik Anadol. Stop by for what’s promised to be an immersive, hallucinatory experience.