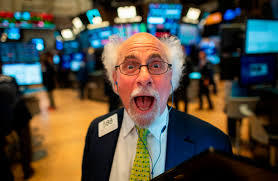 ‘Negative’ Interest Rates Used to Be Unthinkable in the U.S.

How low can the Fed go?

In a global game of interest rates that have dipped below zero for the European Central Bank (ECB), France, Germany, and Japan, there’s always more room to fall. Negative interest rates have become a regular feature of much of the world’s economy.

Central banks have gone negative to prime their nations’ economies. Make investors take a loss to park funds someplace safe, so the theory goes, and they will get those dollars—and euros and yen and everything else—into circulation, jump starting spending and the economy. And it could happen here.

“There is no barrier for U.S. Treasury yields going below zero,” former Fed chair Alan Greenspan told Bloomberg on Tuesday. “Zero has no meaning, beside being a certain level.”

Greenspan said that if the U.S. sees negative interest rates on its sovereign bonds, “it’s not that big of a deal.” But then again, he didn’t think low interest rates during the housing bubble would cause much trouble.

It takes spending to get an economy going in difficult times. After a massive crash like the Great Recession, institutions of all kinds get nervous and hoard cash. As experience now shows, the only organizations banks lend to in such circumstances are those that already have the money they need. The vast majority of companies can’t get capital to spend, which helps jump start the economy. So, central banks have to find new ways to get currency into circulation.

In ‘quantitative easing,’ the central bank buys large blocks of its government’s own bonds from member banks, providing the banks with large sums of cash they can, in theory, lend.

Negative interest rates work differently by making sovereign bonds an unattractive investment. “What they’re trying to do by driving the risk-free rates to zero or lower is to push people and institutions to invest in all sorts of other riskier assets,” explains Lon Erickson, portfolio manager and managing director with Thornburg Investment Management.

Riskier assets include stocks, corporate bonds, and other assets that can transfer money to mid-sized and smaller companies that might be more likely spend.

“Hopefully the borrower then puts money back into the economy in the form of research and development, equipment, or employees,” said Jeff Powell, chief investment officer of Polaris Greystone Financial Group. “It’s unconventional. You talk about desperate measures.”

These unconventional measures are desperate because, by using them, central bankers tacitly admit that they don’t posses the tools to easily and safely steer an economy out of serious trouble.

Negative interest rates have essentially turned bonds into money hotels: places investors hire to store their cash. That seems crazy as bonds have traditionally been a way to make money. But things have changed.

There are investors, both institutions and individuals, who need to park funds and have them reliably available at some future point. It could be an attempt to have cash available to invest when opportunities arise or to meet future obligations, like a pension plan that pays defined amounts to those in it or people who are putting aside money to buy a house or pay for a child’s education.

“They’re going to need it at [a known] point and they want to make sure it’s locked in,” McDonough said. When a group of people expect their monthly check or a university wants a tuition payment, the money needs to be there.

Although Greenspan says negative rates aren’t that big of a deal, not everyone agrees. Markets have already seen unexpected consequences. One is that the effectiveness of extraordinary measures fades over time.

“Cheap money was certainly the tactic of the central bank community during the financial crash of the late 2000s, but it is intriguing that a decade later, the global economy is still not out of the woods,” David Johnson, founding director of currency specialist Halo Financial, said in a note to Fortune.

Negative interest rates also cause behaviors financial professionals didn’t expect. “It’s changed the character of a big part of the fixed [investment] market,” said Karissa McDonough, fixed income strategist in investment management at Peoples United Bank. “What you traditionally looked for fixed income to do for your portfolio was the stable risk-mitigating part. Money and bonds have really seemed like they’ve become a commodity rather than an income generating asset.”

Negative interest rates can also drive down the value of a currency through supply and demand. Investors largely go where the returns are. Currently, that means the U.S., and demand for Treasurys, which use dollar denomination. Shifting money from countries with negative interest rates to the U.S. drives up the exchange rate between those currencies and the dollar.

The move to push down a currency’s value can be deliberate. Shifting exchange rates can make a country’s goods less expensive and help exports, but imports become more expensive.

There are also crazy situations like the Danish bank offering negative mortgage rates, with investors backing the mortgages and paying homeowners 0.5% for borrowing the funds.

The big economic danger of negative interest rates is wandering deep in the woods of unpredictability. The less certainty in the financial world, the more precarious markets become.

“It’s been more than 10 years after coming out of the greatest recession since the great depression and we’re still talking about quantitative easing,” said Andy Richman, director of fixed income for SunTrust Private Wealth Management. “Globally, you see central banks in a dovish manner, easing rates.” But the lower the rates now, the less room central banks have to prop up an uneasy economy. “I think the worry here is if we saw some type of altercation in the Mideast or the tariffs move up exponentially between the China and the U.S.”

Zero interest rates may not seem likely “because we have other tools like quantitative easing, or we can print money that other governments may not have the ability to do,” Powell said.

And yet, 15 or 20 years ago, people might have laughed at the idea that the Fed would buy Treasurys as a way to inject money into the economy.

These days, it seems, nothing is inconceivable.