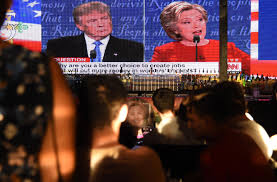 One of the mistakes political observers made in 2016 was looking at the big picture when it came to poll numbers—Hillary Clinton was projected to win the national popular vote and did—and not focusing on the states that would determine the electoral vote. Since Trump is counting on a strong economy to carry him to reelection in 2020, how do the economies look in the states that will determine the election this time around?

The Commerce Department has announced a second quarter real GDP of 2.1%. That is a drop from the first quarter’s 3.1% pace, and there’s no question that “2.1%” doesn’t have the same ring to it as “3%,” which Mr. Trump likes to tout as a reflection of his pro-growth policies versus his presidential predecessor. And the 2.1% figure came before the latest round of trade volleys with China, which could have a direct effect on future economic growth.

But to avoid the mistake made last time around, let’s take a look at how things are going in a handful of likely swing states. Defining a swing state is in the eye of the beholder as demographics, polling trends and other dynamics could change right up until the last minute. But it’s fair to say the following states—which total 83 electoral votes—could be in play in 2020.)

We took GDP by state in the first quarter of 2019 – the latest numbers released the last week of July—and compared them with how those economies were doing in the 3rd quarter of 2016, right before Americans went to the ballot box.

All but one of the swing states are growing more slowly, with Maine and Michigan showing drops of more than two percentage points. But none of them are in recession, and in fact Arizona looks like a positive growth story in a state where Democrats are trying to make inroads.

But wait a minute. Isn’t the national GDP only 2.1% now when it was 3.1% in the first quarter? If only there were a way to make a more relevant comparison. Here’s what we’ve done. We haven’t got 2nd quarter numbers per state yet, but we do have GDP results at the end of last year, when national GDP was almost identical (2.2%).

In this case, four states are lower by more than two percentage points, while Arizona’s growth is a little less impressive. Here’s the problem for the president. With one exception, all of the swing states above were already growing above 3% in 2016. If he is counting on stronger numbers to promote his “greatest economy in history” narrative, it might not resonate in those critical states when growth is comparatively slower.

But there’s another measurement that is probably even more personal than GDP: unemployment. Going from zero income to earning a paycheck can change someone’s outlook overnight. So how do these swing states look compared to 2016?

Every single one of these states has experienced a drop in unemployment. (In this case the negative change is a positive, since fewer people are unemployed.) That’s a trend that can be seen nationally as well. Whether it’s the result of the president’s policies or just coincidental to them, you can expect Mr. Trump, like any seated politician, to claim credit.

And what about income?

In the latest release from the Bureau of Economic Analysis, personal income increased 3.4% in the first quarter of this year (compared with the previous quarter, on an annual basis). That’s a drop from a 4.1% increase in the 4th quarter of last year, but still a positive number.

Six out of seven (New Hampshire, with 4 electoral votes, being the exception) have reported a stronger rate of income growth than seen during the election year of 2016. While wage growth has been slow to budge—even as the economy expands—it has started to move up in recent quarters. But the political narrative on income growth could all come down to timing. Since GDP appears to be slowing, income increases could start to slow as well, a trend that could seep into the election year. And nobody yet knows the full extent of the escalating trade war with China.

There are practically an infinite number of economic measurements that could affect how people vote, from jobs gained or lost by industry, distribution of income, housing cost changes, cost of living increases, household debt, to health care costs.

In 1992, political strategist James Carville came up with a phrase that reminded candidate Bill Clinton to stay on message, “It’s the economy, stupid.” Perhaps the driving mantra in this election cycle should be, “It’s the swing states, stupid.”