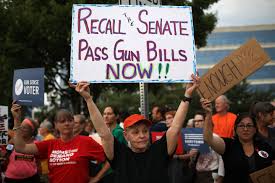 Shares of gunmakers Vista Outdoors and American Outdoor Brands jumped 2% Monday, while shares of Sturm, Ruger & Co rose as much as 4% before forfeiting its gains, closing the day down 2% Monday.

The twisted logic goes something like this. Investors tend to pile into gunmakers following mass shootings, betting that enthusiasts—fearful of greater regulation—may stockpile arms. Indeed, on the trading day following the shooting in Orlando in June of 2016, American Outdoor’s stock rose 7% and Sturm, Ruger & Co was up 9%.

One outlier? After the Sandy Hook massacre in 2012, American Outdoor fell 5% and Sturm and Rugur fell 3%.

Somewhat counterintuitively, the presidency of Donald Trump, who has blamed the shootings on video game violence and mental health issues, and stood in opposition to gun control, has marked a tough stretch for three publicly traded gun companies. While the S&P 500 has risen 40% since Trump’s election, shares of Vista are down 81%, American Outdoor Brands has lost 69%, while Sturm, Ruger & Co has dropped 25%.

Gun sales hit a record in 2016, when it was widely believed that Democratic presidential candidate Hilary Clinton would win the election—and focus on gun control. But once Trump took the mantle and the fear of gun control subsided, sales slumped.

Last year, one of the states friendliest toward gun owners, Florida, passed a bill to limit ownership to those over 21, compared to the previously stated 18. The law had been a reaction to the 2018 shootings at Marjory Stoneman Douglas high school in Parkland that ended with 17 dead, as well as the 2016 shootings at an gay Orlando nightclub that resulted in 50 deaths.

The most recent shooting in the El Paso Walmart has also put pressure on the private sector, with consumers petitioning the retailer to stop selling guns in stores.

One thing is certain: As long as there are people to stockpile guns and investors to buy stock in the companies that supply them, “the next one” feels like a dark inevitability in this America.