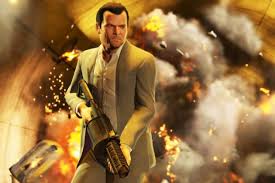 The game publisher credited the title for helping lift results past projections in the latest quarter. Take-Two also boosted its forecast for the year, sending the shares up as much as 7.5% in late trading Monday.

The rally more than erased a sharp decline sparked by negative remarks President Donald Trump made about video-game makers on Monday morning. Following mass shootings in Texas and Ohio, he blamed the industry for contributing to a culture of violence in the U.S.

“We must stop the glorification of violence in our society,” Trump said at the White House after the shootings killed 31 people. “This includes the gruesome and grisly video games that are now commonplace.”

Take-Two, Activision Blizzard, and Electronic Arts, all fell at least 5% following the remarks, showing investors are worried about a backlash against shooter titles like Call of Duty and Fortnite.

Over the years, Grand Theft Auto has been held up by critics as a corrupting influence on youth. The game, which celebrates a gangster lifestyle, features graphic violence, carjackings and even prostitution. Players use firearms and explosives to take out enemies, including law enforcement.

But the video-game industry has long contended that games don’t contribute to real-life violence.

“More than 165 million Americans enjoy video games, and billions of people play video games worldwide,” the Entertainment Software Association said on Monday. “Yet other societies, where video games are played as avidly, do not contend with the tragic levels of violence that occur in the U.S.”

On a conference call Monday, Take-Two Chief Executive Officer Strauss Zelnick highlighted the performance of Grand Theft Auto and its online version—along with other games—for contributing to the New York-based company’s success. The latest installment of the series has sold more than 110 million copies worldwide, he said, and it “remains one of the most revered and successful entertainment experiences across all art forms of all time.”

Zelnick wasn’t asked about Trump’s remarks and didn’t comment on the shootings.

—What you need to know about 8chan, the controversial site tied to the El Paso shooting

—Verizon’s unlimited plans are getting cheaper. Here’s what you should know

—What CEOs, bankers, and tech execs think about a coming recession

—How an alleged Amazon theft ring got the goods

—Boeing adds a second flight control computer to the 737 Max