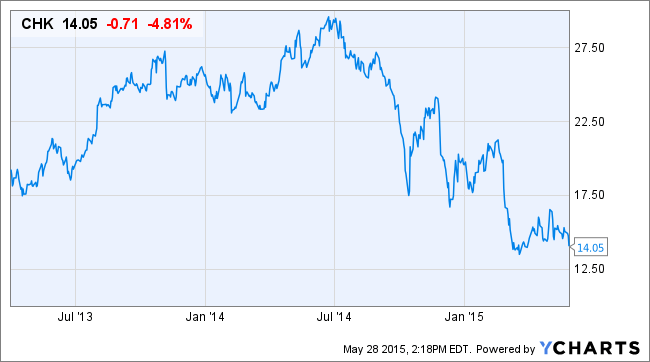 Why Carl Icahn Is Loading Up On This Troubled Energy Company

There isn’t a lot of mystery around what Carl Icahn looks for in an investment opportunity. He wants to own good companies with underperforming management teams. Typically, he can build a large enough position to have a major influence. Then he pushes for share buybacks, board representation, or simply a change in the corner office.

Curiously, a major target for Icahn has none of those options at hand. Cash-strapped Chesapeake Energy Corp. (NYSE: CHK) was once known for a controversial CEO, as I noted in 2010. Yet fresh management has been in place for more than two years, and by all indications, Icahn is a fan of the company’s new leaders.

You would think that Icahn would decide that he’d made a big mistake and cash out his large stake in Chesapeake. Instead, he bought another 6.6 million shares (at $ 17.65 a share) in the most recent quarter, according to gurufocus.com. Even that purchase looks premature, as shares have fallen yet further.

To be sure, many investors continue to shun this stock. Under former management, Chesapeake went on a buying spree across the various shale regions, ultimately putting the balance sheet in peril. New management has begun to undo those efforts. Long-term debt approached $ 13 billion at the end of 2013, while cash remained below $ 1 billion. A series of subsequent asset sales has reduced debt by roughly $ 2.5 billion and Chesapeake now has more than $ 3 billion in cash in the bank.

Still, depressed current oil prices means that Chesapeake will likely outspend its operating cash flow in 2015. These days, most investors are shunning energy exploration firms that cannot live within their cash flow.

Yet Icahn likely spots a subtle turnaround underway now, one that could generate very robust cash flow once energy prices rebound. For example, thanks to investments in new cost-saving technologies, Chesapeake has cut the cost to develop and operate an oil-and-gas well by around 30% in the past few years.

Although Chesapeake has been cutting the number of rigs in service, total output is actually growing, as each remaining well is producing a lot more gas, oil and natural gas liquids. With energy prices at current levels, Chesapeake appears poised to buck the consensus forecast of negative free cash flow this year and at least get to break even.

Yet Carl Icahn is likely focused on this stock for a very different reason: the balance sheet. Chesapeake still holds prime acreage, and the current management team has continually proven its ability to get the best dollar for its assets when they are sold and solid prices for assets that it has been buying. Right now, Chesapeake appears intent on raising cash through joint ventures.

“We could bring in other people’s money and not have to spend Chesapeake dollars on those type of things,” said Jason Pigott, a Chesapeake regional vice president, at UBS’ May 26, 2015 oil and gas conference.

Here’s an even simpler reason to get behind Icahn with this stock: Book value stands above $ 15 a share, and that figure has been written down to reflect very low land valuation assumptions. Chesapeake’s impressive acreage is an asset that will grow in value as energy prices rebound, and M&A activity starts to reflect more robust transaction prices.

Analysts at Goldman Sachs still see more than 50% upside to their price target, noting that “CHK can be a cost-cutting leader, allowing flexibility to make a favorable acquisition that can improve assets.” They add that “our (bullish) call has not worked,” as most investors continue to shun this stock.

Risks To Consider: A fresh drop in oil or gas prices would put this stock deeper into the penalty box. That may be what short sellers are anticipating, as 21% of the float is held short. (The short interest actually fell by nine million shares in the two weeks ended May 15.)

Action To Take –> This is an unusual stock pick from a very successful hedge fund manager who has a proven knack of seeing value where others don’t. Chesapeake Energy is clearly healthier than it was a few years ago and is no longer at risk of a balance sheet blow up. The company’s strong base of real estate, coupled with impressive cost controls, could set the stage for a sharp spike in cash flow if energy prices rise from current levels. Carl Icahn is likely focused on such a scenario and is likely relieved that shares have tangible downside support in the form of discount-to-book valuations.

If oil, natural resources or commodities are what interests you, look no further than StreetAuthority’s Scarcity & Real Wealth. Our resident natural resources expert Dave Forest has more than a decade’s experience as a trained geologist and analyst. His industry insight allows him to read the markets and provide the most timely, potentially lucrative advice for everything from oil and gold to molybdenum. Most recently, Dave has been talking about a rally in gold prices. To gain access to Dave’s latest research, click here.