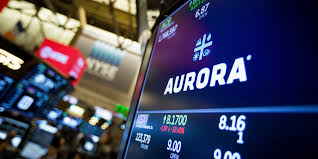 Buy, Sell or Hold? Here’s What Analysts Say About the Top 8 Pot Stocks You Can Buy

Ever since Tilray hit the public markets back in July of last year, marking the first cannabis stock to IPO, dozens of fellow pot companies have followed suit. And according to Morningstar’s Kristoffer Inton, the total cannabis market is going to be 9 times bigger by 2030.

“These are just growth companies in a growth industry,” Inton told Fortune. Many of the major cannabis companies are burning cash, but Inton says that’s to be expected. He notes that many of the larger companies have good margins and positive gross profit, and that their “topline has significant runway for growth.”

But what are analysts saying about some of the top cannabis stocks you can buy right now?

The Canadian cannabis company began trading last July, and marked the first public pot stock on the market. But since its IPO, Tilray’s stock has seen some volatile swings.

While the stock has experienced sharp declines over the past year, Tilray has been up recently following news of their acquisition of boozy candy maker Smith & Sinclair to create CBD-infused edibles.

Tilray is also partnered with Anheuser-Busch InBev to research cannabis-infused drinks, and analysts are bullish on these beverage partnerships across the board.

“I would pay attention to the strategies,” Inton says of partnerships in the space. “The industry is not going to look the same in 5 or 10 years, so it’s important to think about, what are the companies looking at in terms of developing? Which end-markets are they looking to develop into?”

Analysts are less bullish on Cronos, largely due to the company’s valuation and choice of partnerships.

Morningstar’s Inton says they’re maintaining a “sell” rating—and believes the market is “valuing it fully if not a little more,” citing that the company’s partnership with tobacco player Altria “makes a little less sense” than other strategic partnerships in the cannabis space.

Cronos received a hefty $ 1.8 billion investment, or 45% stake, from the Philip Morris parent company late last year. But some analysts aren’t as convinced the move was a good one.

“Where you see these operating synergies with Constellation and AB InBev in terms of developing a food or beverage, and then how to brand in that world and the distribution of that, we don’t really see that same synergy with a tobacco company and a cannabis company,” Inton says. He believes that since tobacco consumers want consistency in their product and brand, Cronos’ move doesn’t make as much sense since cannabis is an “experience” akin to alcohol.

Cowen’s Azer holds back with a “market perform” rating, citing that “valuation and a longer path to profitability keep us on the sidelines” for a higher rating.

Cronos’ stock has traded down for the past six months, currently circling around the $ 14 to $ 15 range per share.

OrganiGram stock has a strong “buy” consensus rating, with shares up some 70% so far this year.

As one of only four producers in Canada to have supply agreements with all 10 Canadian provinces, OrganiGram is well-positioned for further growth in Canada and elsewhere. The company also has a partnership with Eviana for CBD to feed into European markets.

Although the company’s stock has plummeted recently, analysts are overall fairly bullish on Hexo’s stock. In particular, the producer’s exposure to the U.S. market is appealing.

“The Canadian market is not seeing as rapid growth as the U.S. market is, and it’s not as large in size,” GMP Securities’ Robert Fagan told Fortune. “I think that makes the U.S. market more attractive from an investment perspective now, and we still like Hexo.”

To boot, Fagan says Hexo’s recently diminished valuation is now “much more attractive” because its growth prospects could give the company’s value “more credit” in the future.

One of the company’s major selling points is their agreement to acquire U.S.-based pure play Acreage Holdings once federal legalization passes. “For investors of Canopy, you’re getting virtual exposure to the U.S. market because you already have this standing agreement,” Morningstar’s Inton says. But in addition to the preemptive move to team up with a U.S. operator, Inton says Canopy’s partnership with beverage heavy-hitter Constellation Brands (who has a 38% stake in the company) is a key move to set the company up for the future cannabis landscape.

“We think that’s a good partnership because a lot of growth in this market is not going to be what we see today,” Inton said. “I think that cannabis-infused drinks and food is going to be a big growth market going forward, so having a partner like Constellation is big.”

Others like Cowen’s Azer are also big on the stock, rating it “outperform” and noting that Linton’s departure was “positive” for both companies.

Despite having traded down a bit for the past several months, Aurora Cannabis’ stock is still up for the year, and analysts give it a consensus “buy” rating.

Morningstar maintains the stock is still undervalued, but has a lot of opportunities despite the fact that it is one of the only big cannabis players without a strategic partner.

Inton says that since pot cultivation is indoors, big costs like labor and electricity are putting pressure on some of the producers’ balance sheets. But Aurora is working to improve that. “They’re very focused on advancing production there. There’s probably a lot of opportunity, it’s only a few years old where there’s industry-scale cultivation of cannabis, so their development of that could be good,” he says.

And other analysts see Aurora’s international exposure as a huge plus for the stock.

“[Aurora Cannabis] has the largest international footprint among the Canadian LPs and is well positioned to capture additional revenues in Germany and Australia as capacity ramps and the company is able to allocate additional shipments to these markets,” writes Cowen’s Azer.

The cannabis producer has “an issue with compliance,” says Fagan, and their latest run-in with regulators puts the company in a tough spot. CannTrust Holdings got in hot water after an investigation by Health Canada found the producer was using unlicensed greenhouses to grow pot—pushing shares down over 20%.

Shares of CannTrust are down for the year, and analysts are mixed in sentiment. But despite the producer’s multitude of issues, the stock still holds a “hold” consensus rating.

The multi-state operator was pushed in the spotlight recently following an FDA Warning Letter concerning the company’s CBD products and “unsubstantiated claims” of health benefits, according to the FDA. But while the stock dipped at the news, analysts remain bullish on the company as a buy.

“The FDA thing is mainly a noise element in our view because it really doesn’t have a big revenue impact on our forecast, and to be honest, it’s a brand new industry, CBD, where regulations are in the process of being made for the first time,” says Fagan.

In fact, GMP’s Fagan says that Curaleaf is going to be one of the “long term major players” in the space due to its rapid consolidation. And Morningstar’s Inton says Curaleaf is “going to be the most attractive one to be in” for investors due to its U.S. pure play. “Because of that, Curaleaf has a lot of room to grow,” Inton says.