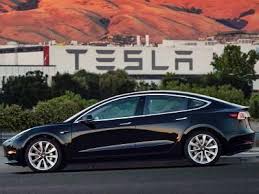 Tesla Stock Plunged Due to Fear of Auto Tariffs from China

The re-escalation of the U.S.-China trade war is hitting Tesla Inc. shares hardest among major automakers, with investors betting it won’t be long before cars crossing the two countries’ borders are again subject to bigger tariffs.

Tesla plunged as much as 6.3% to $ 224.50, the lowest intraday since January 2017, after China defied U.S. President Donald Trump by announcing plans to raise duties on $ 60 billion worth of American imports starting June 1.

While motor vehicles were left off Beijing’s list of goods that China announced Monday it will hit with additional tariffs of as much as 25%, the respite may not last for long. A next salvo is anticipated within hours, with the Trump administration expected to provide details of its plans to impose a 25% additional tariff on all remaining imports from China — some $ 300 billion in trade.

Tesla led the 27-member Bloomberg World Auto Manufacturers Index down as much as 1.6% to the lowest intraday since Jan. 7. The lone gainers in the index were four Japanese automakers whose shares had finished trading before China announced measures to retaliate against tariffs the Trump administration put in place late last week.

Germany’s BMW AG and Daimler AG are the biggest importers of U.S.-built vehicles into China. Their shares closed down 1.2% and 3.3%, respectively, in Frankfurt. General Motors Co. slumped as much as 3.8% while Ford Motor Co. fell as much as 3.3%.

This year already was shaping up to be the worst one yet for Tesla. The only year in which the stock recorded an annual drop was 2016, when the shares declined 11%.

Chief Executive Officer Elon Musk has struggled to reassure investors about the record decline in quarterly vehicle deliveries Tesla registered in the first quarter. The company broke ground on a battery and vehicle factory on the outskirts of Shanghai in January, and Musk, 47, has said it could be producing as many as 2,000 cars a week by the end of this year.

China’s auto market is in the midst of its worst slump in a generation. Sales have dropped each of the last 11 months as trade tensions, a slowing economy and broader consumption trends weigh on demand. GM, one of the largest foreign automakers in the country, slashed local production by almost 20% in the first three months of the year and plans to keep taking measures to reduce inventory in the second quarter.

“You can’t control tweets; you can’t control trade tensions,” GM Chief Financial Officer Dhivya Suryadevara told analysts Monday during an investor presentation. “We are controlling everything we can control.”

—Uber is one of the worst performing IPOs ever