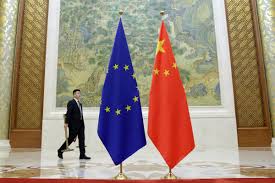 SWITZERLAND’S HALF-IN, half-out relationship with the European Union has suited its traders and firms well. Shares of almost all the large Swiss companies that are traded on SIX, Switzerland’s main exchange, are also available within the EU through alternative exchange platforms known as multilateral trading facilities (MTFs). Traders based in the EU account for 60-80% of trading in Swiss shares by volume. Big Swiss firms like Nestlé, Novartis and Roche make up 20% of the market capitalisation of the Stoxx Europe 50 index. It is, to coin a phrase, a single market.

Now that system is at risk. It relies on “stockmarket equivalence”, a status granted by the EU that allows swift and seamless trading across borders. But if Switzerland refuses to sign a new, EU-drafted trade deal, its equivalence may be revoked. The EU has given Switzerland until the end of June to sign, or at least make progress. If the deadline is met, equivalence is likely to be renewed indefinitely.

If it is not, however, traders within the EU, who are supposed whenever possible to trade within it or on exchanges granted equivalence, would be pushed to trade Swiss stocks on European MTFs, rather than on Swiss exchanges. That would make Swiss stocks harder and dearer to trade, because it would segregate interested buyers and sellers. “You want to buy a stock that is liquid, and that you can get in and out of without excessive costs,” says Mark Hemsley of Cboe Europe, a pan-European exchange that accounts for close to 20% of trading volume in Swiss shares.

What lies behind the threat is the EU’s desire to replace its patchwork of more than 100 bilateral trade deals with Switzerland with a single grand deal like the one it has with Norway—not least to foreclose a post-Brexit future in which Britain cites Switzerland’s pick-and-mix arrangement as a precedent. Strong-arm tactics, the EU hopes, will speed up a process that has already taken four years. But Switzerland’s direct democracy requires the new deal to be put to a referendum. At the moment it looks unlikely to pass.

Incensed by what it regards as bullying, Switzerland’s government has prepared an emergency measure to come into force if the EU responds by withdrawing equivalence. It would attempt to bar the trading of Swiss stocks on EU exchanges by making it a criminal offence. EU-based traders would then be unable to access the stocks outside Switzerland, overriding the bloc’s rules on preferentially trading within its borders.

But a breakdown in stockmarket equivalence could lead to conflict over other financial-market agreements, making it harder for Swiss banks and asset managers to find and serve clients in Europe. And in the longer term fewer companies might choose to list in Switzerland.

So far Swiss companies are more curious than concerned, says Jos Dijsselhof, SIX’s boss. Executives and traders seem to be betting that the EU, preoccupied with Brexit, will want to avoid any extra disruption on stock exchanges and will extend equivalence for a fixed term, perhaps six months to a year. It might be extended repeatedly—with the EU always able to threaten to let it lapse. A shaky relationship with the EU would put Switzerland’s financial-services-driven economy in jeopardy. Its tiny market means it needs clients from the giant trade bloc next door.