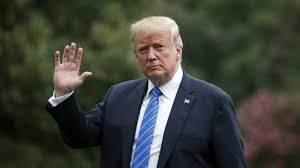 President Donald Trump complains that large corporations, such as Amazon.com Inc., are shirking their tax responsibilities. Yet for at least a decade, Trump paid none or very little in federal income taxes by exploiting some of the same generous tax breaks that the online retail giant and others have used to reduce IRS bills.

Trump’s businesses generated huge losses, and his hotel and casino properties were eligible for large depreciation write-offs that meant he paid taxes for only two years between 1985 and 1994, according to tax records obtained by the New York Times. Trump, then a real estate developer, racked up $ 1.17 billion worth of losses in that time, according to the documents.

As his interest in running for president grew, Trump complained that corporate America isn’t paying enough in taxes. He first tweeted in 2015 “if @amazon ever had to pay fair taxes, its stock would crash and it would crumble like a paper bag.” Since then, he’s sent at least a dozen tweets critical of how little the company pays in taxes.

If @amazon ever had to pay fair taxes, its stock would crash and it would crumble like a paper bag. The @washingtonpost scam is saving it!

Trump used parts of the U.S. tax code to whittle down his tax bill to nothing for several years, the same sections that Amazon has used to pay no federal income taxes for the past two years. The company — led by the world’s richest man, Jeff Bezos, — has been able to get a tax refund for the past two years despite turning a profit. It tapped losses that occurred before it was profitable, for write-offs from building warehouses and distribution centers, in addition to other legal tax breaks.

Trump’s tax information shows he only paid taxes during two years during the decade the Times examined, according to the newspaper’s report. He faced a liability those years — for a combined total of about $ 1.5 million in taxes — because of the alternative minimum tax, a backstop that prevents the wealthy from claiming so many tax credits and deductions that they don’t pay any tax.

Trump’s 2017 tax overhaul eliminated the alternative minimum tax for corporations, but the Trump Organization is made up of a series of pass-throughs and was not affected by that change. The AMT for individuals was largely scaled back so it hits far fewer taxpayers.

Trump has boasted that paying no federal taxes makes him “smart.” He emphasized his business acumen in the 2016 presidential campaign and during his presidency. However, according to the Times report, Trump’s losses during 1990 and 1991, which totaled $ 250 million a year, were more than double those of the nearest individual taxpayer in the IRS’s database of high-income filers.

Trump broke with more than 40 years of tradition by refusing to release his tax returns before the 2016 election. Last month, House Ways and Means Chairman Richard Neal requested that the IRS release Trump’s personal and business tax returns, but Treasury Secretary Steven Mnuchin on Monday refused.

Neal, a Massachusetts Democrat, is currently consulting with legal counsel on how to proceed, and the clash is likely to turn into a protracted legal battle.

Trump sold himself to voters as a master deal-maker who could bring the same success to the country as he says he did to his businesses. The Times report underscores the steep losses and frequent failures of his deals. While he never personally filed for bankruptcy, his businesses sought bankruptcy protection four times.

Trump has defended his refusal to release his tax returns, but saying people “don’t care” about the and “wouldn’t understand” what they contain anyway. About 51 percent of voters said they supported Democrats efforts to obtain the tax returns, according to an April Morning Consult/Politico poll.

—What is contempt of Congress? All of your questions, answered

—What exactly are slavery reparations? 2020 Democrats are trying to figure that out

Follow Fortune on Flipboard for the latest news and analysis.