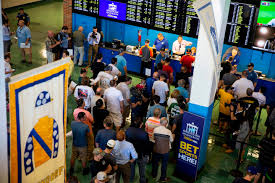 Inside the Crazy World of Sports Gambling: Term Sheet for April 10

$ 8.5 billion. That’s how much Americans will spend betting on college basketball games during March Madness.

Why is this important? This was the first NCAA Tournament since the Supreme Court’s landmark decision last May to overturn the federal ban on sports betting, which for decades had largely restricted the activity to the casinos and sports books of Nevada. In other words, bettors in seven states that have subsequently legalized sports gambling haven’t had to resort to under-the-table wagers — or a trip to Las Vegas — to get in on the action.

I covered the sports betting news last year through the lens of what the ruling meant for daily fantasy sports companies such as FanDuel and DraftKings. In a feature published this morning, Fortune’s Rey Mashayekhi zooms out to provide a bigger picture of the industry.

According to the AGA, Americans illegally wager more than $ 150 billion on sports every year, whether through offshore betting sites or illegal bookmakers. With that kind of money potentially up for grabs via legitimate means, it’s no surprise that there’s a debate currently taking place about what the future of the fledgling, legal sports betting industry should look like. Beyond the leagues themselves, there are numerous stakeholders to account for, each with their own objectives.

There are the casino operators that hold significant influence at the state level, where legislators are crafting the nation’s sports betting regulations. There are mobile betting operators like DraftKings and FanDuel, whose digital platforms are widely considered to be the future of the industry. And, of course, there are the sports teams themselves, many of which are either preparing to, or already taking advantage of, the commercial and fan engagement opportunities allowed by sports betting.

Through interviews with more than a dozen people from these various groups, there is a clear sentiment that all parties have a shared, mutual interest in a successful legal sports betting industry in the U.S. But that’s not to say there aren’t disagreements, currently playing out across the country on a state-by-state basis, regarding issues that could shape the future of sports gambling in America for decades to come.

PUT A PIN IN IT: The three Pinterest founders are expected to become millionaires after the company goes public later this month—and some early investors are also poised to profit. But not everyone.

On Monday, Pinterest revealed that shares would likely be priced between $ 15 to $ 17 apiece—valuing Pinterest at as much as $ 11.3 billion. An impressive figure—but not for those that bought into the company in 2017 at a $ 12.3 billion valuation.

My colleague Lucinda Shen dug into Pinterest’s IPO filing to see who’s making money & who’s … not. Some investors including Goldman Sachs, Kleiner Perkins, the Vanguard Group, and John Hancock Investments first acquired their stakes in the online pin-board maker during the Series G and Series H funding rounds—at a time when shares were valued at $ 21.54 each, according to filings. If the IPO prices at the upper end of the range, that would still be 25.7% below what those firms paid, according to SEC filings and investor information from PitchBook.

…AND MORE NEWS FROM IPO-LAND

Uber goes on the road: Ride-hailing company Uber will kick off its much-anticipated road show to market shares to potential investors this month and would begin trading publicly in May. Uber is reportedly seeking to raise about $ 10 billion. Its offering is expected to be the largest U.S. IPO this year and among the 10 largest of all time.

Slack is looking real attractive: Before Slack goes public via a direct listing, investors are paying big premiums for shares of the workplace software maker on private markets. Investors are buying stock in some cases for more than double the price of Slack’s last fundraising round in August, which valued the company at $ 7.1 billion, according to Bloomberg. Shareholders have sold stock to private buyers in the last two months at prices as high as $ 25 or $ 26 a share, which implies a company valuation of about $ 16 billion.

PagerDuty aims higher: PagerDuty, a San Francisco-based operations and analytics platform maker, raised its IPO price range Tuesday to $ 21 to $ 23 per share, up $ 2 from the figures it had originally reported when it filed to go public. At the high end of this range, the company would boast a market cap of $ 1.69 billion. The company was last valued at $ 1.3 billion after raising $ 90 million in Series D funding from investors including T. Rowe Price Associates, Wellington Management. Accel, Andreessen Horowitz and Bessemer Venture Partners.