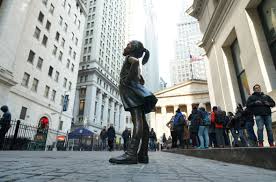 As the firm behind New York’s Fearless Girl statue, State Street Corporation has gotten an estimated $ 13 million in free publicity and even seen success pushing companies to add women to their boards of directors.

But as a shareholder, the firm’s fund specifically devoted to gender diversity has often opposed initiatives in favor of that mission.

New research from Morningstar shows that on eight out of 10 shareholder resolutions related to gender diversity that State Street’s Gender Diversity Index ETF, known as SHE, faced between July 2015 and June 2018, it either voted no or abstained. State Street says that shareholder resolutions “[do] not tell the whole story” of how it approaches this issue. But Madison Sargis, who completed the research at Morningstar, studied the votes of three funds devoted to gender and diversity lens investing. State Street’s SHE was the only one that often voted against these kinds of proposals.

There were two gender diversity resolutions that SHE supported: requiring diverse candidates for new director nominees at Discovery Inc. and a disclosure of EEO-1 data at Lam Research Corporation.

SHE abstained in two other instances: on an employment diversity report at Home Depot and on a second vote on a report on gender, racial, and ethnicity compensation disparities at TJX Companies.

“In the past couple of years we have engaged with hundreds of companies on the importance of diversity, voted against directors over 1,000 times for lack of board gender diversity, and been a vocal proponent of the value of diversity in writing and speech,” a State Street spokesperson told Fortune. “Examining our voting record on a set of shareholder proposals that have significant variations in language year over year does not tell the whole story of how we approach this issue. We do not simply consider the topic being addressed in a shareholder proposal when deciding how to vote, rather we vote on a case-by-case basis, taking into account each company’s unique circumstances and the level of disclosure relative to our expectations.”

State Street has drawn criticism before for issues seemingly in conflict with its Fearless Girl campaign, which launched two years ago. The firm paid $ 5 million in late 2017 to settle with more than 300 female employees who said they’d been paid less than their male colleagues after a Department of Labor audit uncovered gender-based discrepancies in compensation.

Sargis also studied proxy voting by gender lens investing funds Pax Ellevate Global Women’s Leadership Fund and Glenmede’s Women in Leadership Portfolio. Both voted in favor of all gender and diversity resolutions they faced—23 for Pax and 14 for Glenmede.

“The voting record for State Street’s Gender Diversity Index ETF seems at odds with the fund’s stated intention to ‘advance women through gender diversity on their boards of directors and in management.’ Many investors are choosing to invest in certain funds because they align with their values, so evaluating a fund’s voting record on relevant issues is something these investors may want to consider,” Sargis says. “The findings tell us that a fund’s stated intention doesn’t always translate to its voting record.”

State Street has said it prefers “engagement” with companies on these issues and others instead of voting action, which it considers a “last resort,” and Sargis considered that preference in analyzing SHE’s voting record. Across the entire firm, State Street voted in favor of 19% of 63 resolutions related to gender diversity.

But a firm’s overall record doesn’t necessarily dictate how its gender lens investing funds will vote. Glenmede’s Women in Leadership Portfolio, for instance, has a 100% voting record in favor of gender-related shareholder resolutions. Across the rest of Glenmede’s portfolio, meanwhile, the firm voted against these kinds of resolutions more than half the time. Unlike Glenmede, State Street doesn’t seem to adjust its voting preferences to account for the gender and diversity mission of its SHE portfolio, Sargis says.

The signature issue of State Street’s Fearless Girl campaign is improving women’s representation on boards. A board-related shareholder resolution was one of the two proposals State Street’s SHE fund voted in favor of. But Sargis argues that issues like pay equity and linking executive compensation to diversity—among the matters SHE rejected—support State Street’s board diversity mission; they build the pipeline of female talent that can feed companies’ boards later on.

Meanwhile, the Fearless Girl campaign is going strong. The statue moved from in front of Wall Street’s Charging Bull sculpture to a permanent home outside the New York Stock Exchange. Last month, a second Fearless Girl statue was unveiled in London.