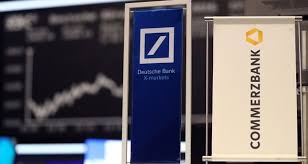 SO MUCH FOR the sepulchral calm of a German Sunday. On March 17th, after months of prodding from the German government and chatter in the financial press, Commerzbank and Deutsche Bank, Germany’s two largest listed lenders, said that they would begin exploring a merger.

A deal, both banks are at pains to add, is far from certain. If it happens, it would create Europe’s third-biggest bank by assets, behind Britain’s HSBC (which does most of its business in Asia) and France’s BNP Paribas. It would also join together two chronic underperformers. Last year Deutsche’s return on equity, a puny 0.4%, was its first positive figure for four years. Commerzbank’s has bettered last year’s anaemic 3% only once since 2011.

Combining two struggling banks looks like an improbable method of creating the robust “national champion” of which German ministers have been dreaming. Years of ultra-low interest rates and an overcrowded banking market—most of which is served by public-sector and co-operative lenders—have sapped profitability, even though both Commerzbank and Deutsche Bank are well capitalised and amply liquid. A merger is unlikely to change that.

Encouragement from Berlin alone is not—or should not be—reason to merge, although the government is Commerzbank’s biggest shareholder, with 15%. The right gauge is what all the shareholders of both banks would stand to lose or gain. You might suppose that Deutsche’s should be keen on a fresh start. Its fall from grace since the financial crisis is a cautionary tale often told: its share price has fallen by 90% since 2007; not until 2015 did it accept that its global moneymaking machine, aka its investment bank, was kaputt; it is on its fourth chief executive in as many years; and so on. But its smaller neighbour may have the better (or rather, less bad) end of the bargain.

To both banks, a merger brings the promise of scale, especially in retail banking. Deutsche’s share of the German market—adding its upmarket “blue” Deutsche Bank brand to the more basic Postbank—is around 11%, according to Autonomous Research; Commerzbank’s is 8%. With one-fifth of the market, a combined entity would be by far the biggest in Germany, maybe enough to exert some pricing power. Cutting costs—for instance by closing branches—might take out 30% of Commerzbank’s cost base, according to Magdalena Stoklosa of Morgan Stanley.

Should the pair come to talking about takeover terms, Commerzbank’s bargaining position looks far stronger than it could have dreamed of a few years ago. Neither bank can be called highly valued: the stockmarket prices Deutsche at a paltry 24% of net book value and Commerzbank at 31%. But so far has Deutsche fallen that its market capitalisation is now just twice Commerzbank’s, against six times as much in 2013 (see chart). Even taking into account Deutsche’s talent for attracting trouble, for Commerzbank the ratio may not get better than this.

Besides extra bulk and the chance to serve more of the Mittelstand—Germany’s myriad, mainly family-owned, companies—Commerzbank offers Deutsche improved funding. Commerzbank relies more than Deutsche on deposits, which are cheaper and stickier than funds from financial markets. Its €311bn ($ 363bn) of deposits at the end of September were worth 63% of its adjusted assets; Deutsche’s €553bn, 52%. So deep have been Deutsche’s woes that for most of the past three years its five-year credit-default-swap spreads—the cost of insurance against its failure to honour a bond—have been wider, often by half a percentage point or more, than those of the smaller bank. Last month it sold bonds at steepish yields.

Although a merged bank would have more heft at home, it is hard to see what a takeover could do to restore Deutsche’s fortunes as a global investment bank. Having wisely given up its own international investment-banking ambitions, Commerzbank has little to offer. Admittedly, Deutsche is not alone: since 2012, notes a new report by Morgan Stanley, European investment banks have lost nine percentage points of market share in America, while Wall Street firms have gained the same amount in Europe. Though Deutsche is still Europe’s biggest, as well as its homeland’s flag-bearer, it will need more than a merger to patch its tattered standard.