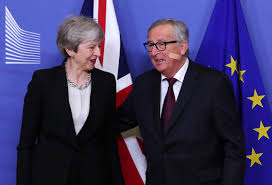 ‘Time of the essence’ say May on latest Brussels shuttle

British Prime Minister Theresa May held “constructive” talks in Brussels on Wednesday as she sought concessions on Brexit from a sceptical European Union, her strategy under strain after the defection of three lawmakers.

Emerging from an hour or so of discussions with European Commission President Jean-Claude Juncker, the second in as many weeks, May told a British television channel that she again pressed for “legally binding changes” to a deal she agreed with the EU in November so that a “backstop” policy on the Irish border would not bind Britain indefinitely to keeping EU rules.

It is this part of the treaty, intended to avoid new trouble in Northern Ireland, which the British parliament rejected last month. That pitched the country toward the exit on March 29 without a safety net — and left May scrambling to secure concessions both in Brussels and from lawmakers in her own party and others.

“I’ve underlined the need for us to see legally binding changes to the backstop which ensure it cannot be indefinite,” May said. “That’s what is required if a deal is going to pass the House of Commons … Time is of the essence.”

She said there had been progress and her Brexit minister would be back in Brussels on Thursday, along with the attorney general Geoffrey Cox. It is he whom the EU must find a way to persuade to change his view that the backstop might never end.

People close to the negotiations say discussions have been focusing on what May and Juncker in a joint statement called “appropriate legal assurance to both sides”.

The EU has refused to reopen the treaty or to add new text that would anger Ireland by putting a time limit on the backstop or giving London a unilateral right to quit an arrangement that would see Britain obliged to follow EU trade and industry rules until a better way is found, probably using technology, to keep the border open while letting the UK diverge from EU standards.

Various kinds of text, focusing on how a future trading relationship may work after a status quo transition period, have been discussed, officials say. But EU leaders, many of whom will meet May during a weekend summit with Arab governments in Egypt, want assurances she can deliver parliamentary ratification for any new deal before they will nail down their concessions.

That kind of brinkmanship could, many officials say, lead to a delay in Brexit as the only option for May to avoid running out of time to pass the necessary laws in the next month.

EU summit chair Donald Tusk said on Wednesday: “If Britain fails to prepare some sensible option on time, then there is always a possibility to extend these negotiations in time. This would be better than a divorce without agreement.”

May’s ability to get any deal through parliament suffered a new blow earlier in the day when three of her Conservative lawmakers quit, condemning her “disastrous handling of Brexit”, which they, like she, had opposed during the 2016 referendum.

Despite some support for a new vote, EU leaders no longer hold out hope of Brexit being halted and, with governments and the Commission saying they are ready if need be for a no-deal departure, many diplomats fear political deadlock in London has made such an outcome as likely as May securing ratification.

In their joint statement, May and Juncker said talks were “constructive” and their teams would press on to “explore the options in a positive spirit”. The two plan to meet again before the end of February, when May faces a new test in a parliament.

She has less than a month to crack the puzzle, EU diplomats say, arguing that a compromise must be in place a week or so before a summit on March 21-22 that could seal any accord.

“They have until March 10, maybe March 15 at the latest,” one said. “Otherwise they will be forced into a delay of Brexit, or crash out.”

Despite that, few in Brussels expect a quick breakthrough: “It’s too early,” another EU diplomat said. “The second half of March is the make-or-break moment.”