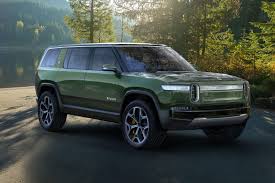 Amazon and GM May Invest in Electric Pickup-Truck Manufacturer Rivian

As Silicon Valley and Detroit slowly converge onto each other’s traditional turfs, companies in both industries are finding themselves forging unexpected alliances. The latest in such partnerships may be Amazon and General Motors, who are considering co-investing in Rivian, a maker of electric pickup trucks, according to Reuters.

The joint investment would confer unicorn status on Rivian, valuing it between $ 1 billion and $ 2 billion. It would also give both the ecommerce giant and the storied automaker minority stakes in Rivian, a startup based in Plymouth, MI. The investment, still in negotiation, could be officially announced as early as this month, Reuters said.

On its web site, Rivian calls its trucks “the world’s first electric adventure vehicles,” a claim that Tesla, the maker of the Model X SUV, might take issue with. Rivian’s trucks—which the company says feature a quad-motor systems for off-road driving, a wading depth of 3 feet, and three-second acceleration to a speed of 60 miles per hour—could offer Tesla competition in its high-end model.

Last August, Tesla CEO Elon Musk discussed electric pickup trucks as a likely future project. “Probably my personal favorite for the next product is pickup truck, and we are going to just do an amazing pickup truck,” he said in a conference call discussing earnings.

GM has been investing in electric cars like the Chevrolet Bolt EV. Both companies have been investing in other emerging automobile technologies. Earlier this week, Amazon participated in a private round of investment in Aurora, a self-driving car company, as it raised $ 530 million in funding.