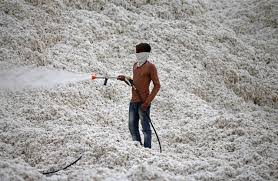 India’s cotton imports are likely to jump 80 percent from a year ago as production could fall to the lowest level in nine years due to low rainfall in key growing region, a senior industry official told Reuters on Thursday.

Higher imports by the world’s biggest cotton producer could support global prices, trading near their lowest in more than a year. The drop in Indian supplies could help rivals such as the United States, Brazil and Australia increase cargoes to key Asian buyers such as China, Bangladesh and Pakistan.

“The production is not sufficient to fulfil local consumption. From March onwards imports will pick up,” said Atul Ganatra, president of the Cotton Association of India (CAI).

Spinning mills have imported 548,000 bales by the end of January out of total contracts of 1 million bales signed so far in the current marketing year, Ganatra said.

“Due to dry weather farmers were forced to uproot plants early. They couldn’t go for third and fourth picking,” he said.

Rains in Gujarat and Maharashtra, which account for more than half of India’s cotton production, were nearly a quarter below normal during the June-September monsoon season in 2018.

The drop in output is likely to lead to lower cotton shipments from India.

India’s exports could fall 27.5 percent from a year ago to 5 million bales, the lowest level in a decade, Ganatra said.

In June, traders were expecting India to export as much as 10 million bales amid strong demand from China due to the trade dispute between Beijing and Washington.

Trade bodies have been reducing cotton production estimates for the current season due to low rainfall and as pest attacks curtail per-hectare yields.

Indian farmers have adopted genetically-modified seeds known as Bt cotton that are resistant to boll worms, but it hasn’t stopped infestations. Pink boll worms consume the fibre and seeds inside a cotton plant’s boll, or fruit, and yields fall.