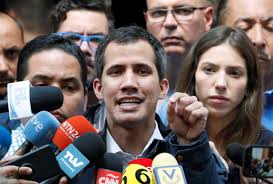 Venezuela’s opposition movement can achieve a peaceful transition from President Nicolas Maduro and eventually hold free elections, its leader Juan Guaido told CNN in an interview that aired on Tuesday.

“We are sure we can achieve a peaceful transition – a transition and eventually free elections,” Guaido said in the Spanish-language interview, which was translated into English.

“We must use great pressure for a dictator to leave, install a transitional government and have free elections.”

Guaido, who has led the movement against Maduro with support from the United States and other Western nations, spoke after Washington on Monday imposed sweeping sanctions on state-owned oil firm PDVSA as it pressured Maduro’s socialist government.

Guaido said he would offer amnesty to Venezuela’s military and extend it to Maduro, according to the television news network.

Guaido also said he had spoken with U.S. President Donald Trump a number of times, according to CNN. When asked about a possible military option in Venezuela, Guaido said all options were on the table, CNN said.