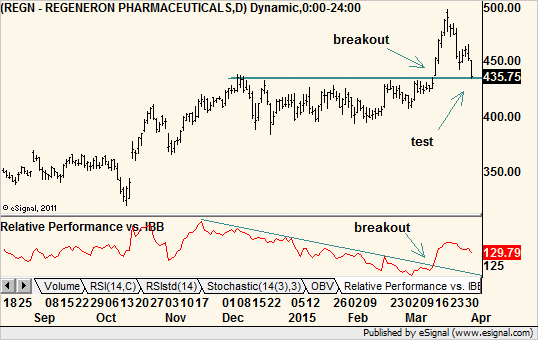 There are as many ways to analyze the stock market as there are analysts. However, one method that has been proven in theory — and, more importantly, in real life — is relative strength investing.

The idea is that stocks, sectors and markets all have inertia, not unlike an aircraft carrier powering across the ocean. The more inertia an asset has, whether it is from a bull market, a powerful sector or simple demand for shares, the more likely it will continue moving forward. Conversely, the more it will take to reverse its course.

In the stock market, we’ve all heard gurus profess that they buy the strongest stocks in the strongest sectors. This is the basis of relative strength investing. It is also the essence of top down investing where we look for the market-leading sectors and then drill down for individual stocks at the top of their sector “class.”

It is no secret that biotech has been one of the strongest groups in the market. In the past two years, the iShares Nasdaq Biotechnology (NASDAQ: IBB) is up 113% compared with 33% for the S&P 500.

Biotech has actually been outperforming the broader market since late 2011. Such a statistic makes some investors nervous because no part of the market leads forever. Three and a half years of leadership is a long time, so it seems logical that the massive run in biotech is near its end. The problem is that logic failed its test in the marketplace. We could have worried about the exact same thing when biotech scooted higher in 2012, and again in 2013, or 2014.

The point is that sectors that lead tend to do so for quite some time. Strength begets strength. And as legendary technical analyst Alan Shaw said decades ago, “The most bullish thing a stock can do is get overbought and stay that way.”

Within the biotech sector, there are, of course, stronger and weaker stocks. One of my favorites in the group is Regeneron Pharmaceuticals (NASDAQ: REGN), which makes products to treat cancer, inflammation and other conditions.

No doubt, this stock has been a superstar, rising 10-fold since the beginning of 2011. Shares took a breather from mid-December to mid-March, but then scored a sharp upside breakout on March 16. Shares rallied 5.2% on the day following positive news about the company’s next-generation cholesterol drugs.

On a relative basis versus sector proxy ETF IBB, we can see at the bottom of the chart that REGN actually scored a breakout a few days before that.

While REGN was merely an average performer when compared with its peers over the past few months, it is crushing the broader market with a six-month return of 25% compared with 6% for the S&P 500. And with its recent breakout relative to the sector, it now appears to be one of the better stocks in the group.

REGN’s performance gives it a relative strength (RS) rank of 85. RS assigns a numerical score from 0 to 100 to a stock based on its price performance relative to all other stocks in the market over the past six months. It gives you a way to quantify the strength of a stock’s past performance, and therefore, how it is likely to perform going forward.

Momentum investors typically look for stocks with a RS of 70 or above, meaning they have outperformed 70% of the market over the past six months. REGN’s RS of 85 means it has outperformed 85% of all other stocks. Said another way, its share price performance puts it in the top 15th percentile.

Note: If you want more proof of just how profitable investing in stocks with high RS is, consider this: In 2015 alone, a RS-based system found stocks that have returned 7.2% in four days, 25.7% in 70 days and 53.4% in 55 days — all while the broader market is barely in the black for the year. If you want to learn more about how you can start using RS to your advantage, follow this link.

As we can see on the chart, REGN broke out of a four-month trading range in March. The rally was quite steep and coincided with a rather frenzied market where leaders such as biotechs and semiconductors gained at unsustainable speeds. The ensuing pullback, sparked by comments from Federal Reserve Chair Janet Yellen, sent these stocks tumbling. However, many found support within a few days, REGN included, which came all the way down to test its breakout.

A test of support gives the bulls a second chance to buy at lower prices, and if the stock is still strong, they will indeed do so.

To summarize, we have a strong stock in a leading sector that is testing its recent breakout. I won’t ignore the fact that the stock has come a long way and that the overall bull market is getting a bit long in the tooth. However, stocks with high relative strength and solid technicals can withstand market bumps better than other stocks.