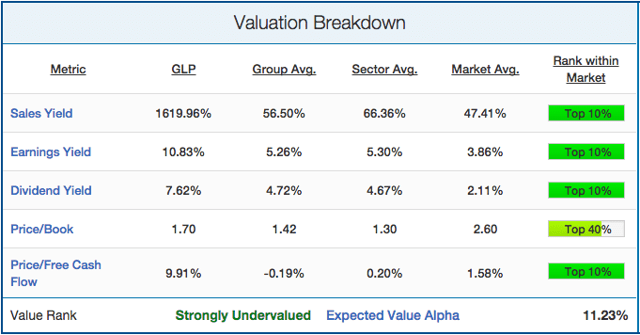 Since crude oil started its collapse in the summer, we’ve stayed away from companies that generate the bulk of their revenue from oil. Instead, we’ve written about companies that have benefited from the collapse, such as oil refiners and airlines. With that being said, we believe that Global Partners LP (GLP) is one of the strongest investment opportunities available in the market right now. As mentioned in a recent SA article, most of Global Partners revenue is uncorrelated to oil prices and thus the dramatic downward move in their share price may be overdone. Global Partners is a limited partnership that purchases, sells, and transports petroleum products such as crude oil, gasoline, and gasoline blend stocks. The company currently has a market cap of $ 1.07 billion, with a stock price beta of $ 0.89. We believe Global Partners will vastly outperform the market over the next twelve months due to the company’s extremely attractive valuation, solid profitability, and the strong bullish sentiment showed by the “smart money” on the street.

Our analysis focuses on identifying and exploiting stock market “anomalies.” We’ve identified a variety of different academically tested metrics that have a long track record (over +50 years) of predicting stock returns. We’ll provide links to the academic papers that fuel our analysis as we progress through the report so you can see for yourself whether to trust the metrics we rely on. Click here to see a detailed breakdown of the prominent academics (many of whom manage billions of dollars) and their contributions to the field of stock research that we draw inspiration from.

We’ll start by analyzing GLP’s value profile. This is important to look at as value stocks (with low ratios of price to book value) have higher average returns than growth stocks (high price-to-book ratios). GLP’s valuation profile is shown below:

On every measure of value shown above, GLP looks very cheap. On a revenue basis, GLP sports an astronomical sales yield of 1620%. That means investors can currently get over $ 16 of TTM revenue for every $ 1 they invest in the stock! That is much higher than the $ 0.66 an investor would get from investing in the average energy stock. You could argue that revenue is not a good measure of value for GLP, but the company sports a very high earnings yield of 10.83% as well. This is more than double the earnings yield an investor can get from the average energy stock (5.30%) and almost triple what an investor can get from the average stock in the market (3.86%). GLP also happens to be a free cash flow machine, with TTM free cash flow making up just below 10% of the market cap. As impressive as it is that its free cash flow is 3 times the market average, to be doing so in an industry group (Oil, Gas, & Consumable Fuels) that is averaging negative free cash flow is a true standout. While GLP’s price to book is slightly higher than the energy stock average at 1.70x, it is still well below the overall market average of 2.60x. Even if GLP stays perpetually undervalued, investors can look forward to a relatively safe yearly dividend of 7.62%. Overall, our algorithms rate GLP as “Strongly Undervalued” and holding everything else equal, expect the stock to beat the returns of the S&P 500 by over 11% just based off its valuation profile.

We’ll now take a look at five different momentum, growth, and profitability metrics that were each shown to have predictive power in Jim O’Shaughnessy’s book “What Works On Wall Street.” GLP’s growth profile is shown below: 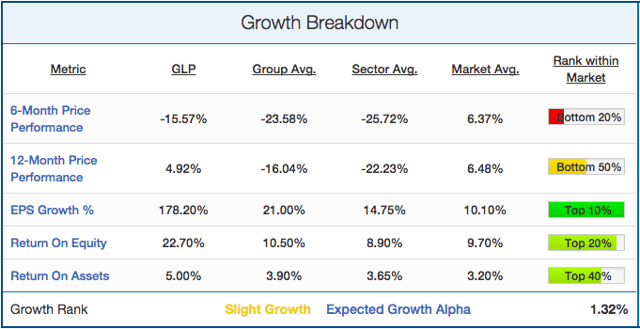 We believe GLP should be bought because of its value, but the stock’s growth profile is by no means weak. While GLP is down 15.57% over the last six months, it has actually outperformed the average stock in its industry group (-23.6%) and sector (-25.7%). Even with the decline in the short-term, GLP is still up for the year (4.92%) while energy stocks have gotten killed (-22.2%) in the same timespan. GLP has also managed to grow EPS at a strong clip, with trailing twelve month EPS increasing over 178% from the previous trailing twelve months of quarterly EPS. Lastly, GLP continues to lead the sector in profitability, returning 23% on equity and 5% on assets. Both rates of return are well above the industry group, sector, and overall market averages.

Overall, our algorithms rate GLP as a “Slight Growth” company. This implies that according to historical precedents, GLP’s combination of momentum, growth, and profitability make the stock likely to outperform the market if everything else was held equal. Given GLP’s attractive valuation, this is a great sign for the stock moving forward.

Now that we’ve crunched the numbers, we’ll now have a qualitative discussion of different catalysts and risk factors that could significantly impact GLP’s share price over the next twelve months. One thing that worries us is GLP’s recent secondary offering of 3.65 million shares at $ 40.24 back in January. Historically, companies that dilute investors with secondary offerings tend to underperform the market by a wide margin over the next months. With that being said, we believe GLP is the exception to the rule for a few reasons. First of all, this is not a company that is issuing more shares just to survive. GLP is profitable with a high dividend, and instead used this secondary offering to free itself from a relatively high debt load. Additionally, GLP is structured as a master limited partnership (MLP), and thus it is not in the general partner’s interest to dilute investors as they themselves control a huge portion of the ownership. For these reasons, we feel that the secondary offering is justified and not something that changes our overall thesis.

Another thing to look at is what the “smart money” on the street is doing with GLP. The “smart money” includes company insiders, institutions, and short sellers, each of whom tends to be more sophisticated than the average investor. Of these investors, the activity of short sellers tends to be the best predictive indicator. GLP’s short interest relative to the industry group, sector, and market averages is shown below: 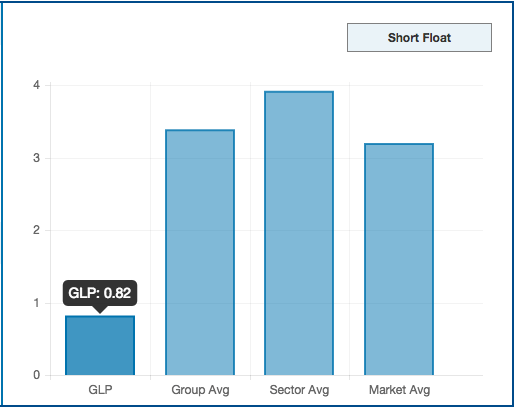 As we can see, short interest in GLP is at an extremely low 0.82% of the total float. This is more than four times less the current average in the overall energy sector (4%), and shows that short sellers are unwilling to bet on a further collapse in GLP’s share price.

In conclusion, we believe that Global Partners is an extremely attractive investment opportunity that we are confident will beat the returns of the S&P 500 over the next twelve months. GLP combines an extremely attractive valuation with excellent return rates, solid price momentum relative to its sector, and very low rates of short interest. On top of all this, investors get the benefit of a relatively safe yearly dividend of 7.6% that has steadily increased over the last three years.