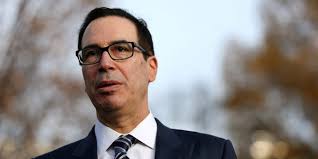 U.S. stocks futures rose, signaling the S&P 500 will rebound from its worst week since 2011 as investors speculated the sell-off went too far, too quickly.

Contracts on the S&P 500 advanced 0.6 percent at 8:45 a.m. in London, extending their earlier gains and on track to halt the longest slide in a year despite European equities trading lower after the open. Dow Jones Industrial Average futures gained 0.5 percent, while Nasdaq 100 contracts climbed 0.8 percent.

The Stoxx Europe 600 fell 0.4 percent, led lower by banks, retail and personal & household goods. All sectors were in the red on a short trading day marked by low liquidity and continued concerns about growth and interest rates.

Investors rattled by a months-long rout in American equities looked set for a reprieve ahead of the holidays even as tumult continues to lash markets. Treasury Secretary Steven Mnuchin reassured markets over the weekend that President Donald Trump does not intend to oust Federal Reserve Chairman Jerome Powell, a report that added to Wall Street jitters about the trade war, rising interest rates and the government shutdown.

“The actual threat is more a function of words than substance,” said Ernie Cecilia, chief investment officer at Bryn Mawr Trust Co. “That said, the market reaction to the FOMC statement and post-meeting press conference indicate to us that the market views the possibility of a policy mistake by the Fed as very high.”

Losses on the equities markets have been unrelenting. In a year of big reversals, stocks just notched their worst week since 2011, with the S&P 500 falling 7.1 percent and the Nasdaq Composite descending into a bear market. Equally troubling was the sheer volume descending on exchanges during a typically sleepy stretch ahead of the holidays. The current sell-off has now lasted 13 weeks, and just featured declines of greater than 1.5 percent in five of the last six days.

Word Trump had discussed firing Powell went down poorly over the weekend on Wall Street, a place not known for its sympathy with Powell’s policies. While the Fed’s program of pushing up borrowing costs even as inflation expectations ease has been blamed for exacerbating and even causing the meltdown in equities, most investors saw the prospect of ousting Powell as ill-advised meddling that could sow more agitation in a market that just saw volatility surge to a 10-month high.

Fed angst was at the center of last week’s market cyclone, in which the Nasdaq Composite became the biggest U.S. equity gauge to enter a bear market since the financial crisis. The Federal Open Market Committee raised interest rates for the fourth time this year on Wednesday and Powell downplayed the role of market turbulence in setting policy, disappointing bulls who hoped for broader acknowledgment of their plight.

Concern about an escalating U.S. trade war with China has hurt stocks in recent weeks, and Trump has also entwined his trade war with Fed policy. In a statement on Saturday attributed to the president that was tweeted by Mnuchin, Trump said current Fed policy was terrible “especially in light of my major trade negotiations which are ongoing.”