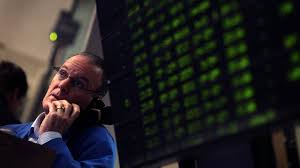 U.S. stocks took another beating Monday with the Dow Jones Industrial Average falling more than 500 points and the S&P 500 Index dropping to its lowest level in 14 months, as investors braced for a rate-setting meeting at the Federal Reserve this week.

According to Bespoke investment Group, more than half of the stocks in the S&P 500 have lost 20% from their 52-week highs, placing them in bear-market territory. More than 100 of them reached new lows for the year on Monday alone.

The Fed’s Open Market Committee, which sets the central bank’s monetary policy, is holding a two-day meeting Tuesday and Wednesday, with Fed Chair Jerome Powell expected to hold a press conference once it ends. The FOMC is widely expected to raise interest rates during the meeting, although most investors will be focused on the Fed’s guidance for interest rate policy in 2019.

Previously, the Fed has signaled it would raise interest rates three more times next year to stave off inflation, although more recently officials have indicated it would take more of a wait-and-see approach. President Trump, who has been vocal in his criticisms of the Fed’s interest rate increases, tweeted that he found it “incredible” the central bank would raise rates again, given low inflation and a strong dollar.

It is incredible that with a very strong dollar and virtually no inflation, the outside world blowing up around us, Paris is burning and China way down, the Fed is even considering yet another interest rate hike. Take the Victory!

Beyond interest rates, other factors are prompting investors to sell off stocks: The possibility of a government shutdown, weakness in China and European markets, and lingering trade tensions. Some of these concerns have been dragging stocks down for nearly three months. Bloomberg calculated that global stock markets have lost nearly $ 15 trillion since January.

Adding to concerns was a growing sense that the market meltdown will extend into 2019. Some investors have been waiting for a “Santa rally” that often occurs during December. But no rally or rebound has emerged this month. If stock’s remain at current levels, this month would be the worst December for stocks since the Great Depression, CNBC said.

“Some investors whom we have spoken to had positioned themselves for a December rally and the path has been painful,” investment firm Bernstein wrote in a research note.