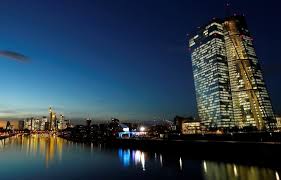 Europe’s growth will be around 1.7% next year, Draghi predicted, citing the persistence of uncertainties related to geopolitical factors, the threat of protectionism, vulnerabilities in emerging markets and financial market volatility.”

The euro fell against the dollar on the news, though it had been widely expected since it was announced in June.

The central bank will continue to charge banks 0.4% for deposits it holds for them through next summer, it confirmed.

Draghi said Europe needed to take other steps to avoid undermining growth. He left himself and European policymakers plenty of wriggle room to adapt to changing conditions. For example, while the ECB will stop buying new QE bonds, it can reinvest the capital it collects from maturing bonds, as the U.S. did for some time after its last fiscal stimulus.

“The ECB is keeping as many cards to its chest as possible to keep a maximum degree of flexibility,” ING economist Carsten Brzeski told Reuters.

The U.K.’s Bank of England has stopped its QE program, too, though Japan continues to add to its $ 4 trillion worth of purchases.