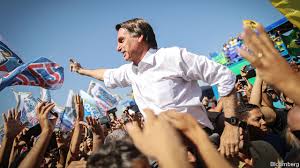 “WE CAN’T SAVE Brazil by killing old people,” says Jair Bolsonaro, Brazil’s next president. He is referring to the country’s main public-policy problem: a bill for pensions that eats up more than half of the federal budget and is growing at a rate four percentage points above inflation. He is not the only person in the incoming administration to have expressed ambivalence and a lack of urgency about reining the spending in. “We have four years to do it,” says Onyx Lorenzoni, his chief of staff.

And yet many are betting Mr Bolsonaro will act speedily to solve a problem that has bedevilled Brazil for years. Their optimism stems from his pick for economy minister: Paulo Guedes, who studied at the University of Chicago and co-founded BTG Pactual, Brazil’s foremost home-grown investment bank. Investors are placing their faith in him to lead the fiscal adjustment of 4-5% of GDP required to stabilise the public debt, and the liberalising reforms needed to rekindle growth after a recession in 2015-16 that wiped 7.3% off GDP.

The outgoing president, Michel Temer, managed some fiscal reforms, notably a cap on federal spending and cuts to subsidised lending. But pensions defeated him, after he looked likely to get caught up in a corruption investigation that had already entangled many lawmakers. This year’s election pitted Mr Bolsonaro, a law-and-order candidate only lately converted to economic rectitude, against Fernando Haddad, a left-wing acolyte of Luiz Inácio Lula da Silva, a jailed former president. During the rancorous and unpredictable campaign, reforms were put on hold. Investors decided to “wait the whole thing out”, says Tony Volpon of UBS, a bank. Now they are celebrating, perhaps prematurely. The currency, pummeled in the past two years, staged a rebound (see chart 1).

Since Brazil has healthy foreign-exchange reserves and its lowest inflation rate for decades, progress depends not on global financial markets or institutions, but on politicians in Brasília. That is both encouraging and worrying. “To reform the system, you have to be inside it,” says Ana Carla Abrão of Oliver Wyman, a consultancy. But insiders have resisted reforming pensions for years.

Their generosity dates from the transition from dictatorship to democracy in the 1980s. The pressure to keep them generous is “unimaginable”, says Fernando Henrique Cardoso, a former president who tried reform in the 1990s. The system was once even more insanely lavish.

The government scheme for private-sector workers is heavily subsidised. The public-sector scheme is even more bountiful; civil servants not uncommonly retire in their 50s on full pay. Military pensions are particularly outsize—but they are unlikely to be touched. (Mr Bolsonaro, a retired captain, began drawing a pension at 33.) Such privileged groups are sure to resist reform. According to the treasury, 41% of pension benefits go to the richest fifth of Brazilians, and 3% to the poorest.

But an ageing population means the system is unsustainable. There were eight workers for every pensioner in 2000. By 2060 there will be just two, says Paulo Tafner of the Institute for Applied Economic Research, a government-linked think-tank. The government spends 12% of GDP on pensions, compared with an average of 8% in the rich countries of the OECD (see chart 2).

Pensions have played a big part in pushing the public debt-to-GDP ratio from 52% at end of 2013 to 74%. Without reform, it could soon pass 90%. A ten-year freeze on federal spending in 2016 slowed the rise in debt. But as pensions continued to swell, they exacerbated the squeeze on public services and investment in infrastructure.

Many hoped that before taking office Mr Bolsonaro would be able to bounce the outgoing congress into passing a stalled pension reform introduced by Mr Temer. Though that proved hopeless, the new president may still revive it next year. It keeps the “pay-as-you-go” system, in which current workers support current pensioners, but phases in a minimum retirement age and minimum contribution period. It would save 400bn reais ($ 100bn) over the coming decade. (For comparison, net public debt has risen by 260bn reais since the start of the year.)

Others advocate greater radicalism. During the campaign Mr Guedes proposed a “capitalisation” model, with retired people drawing pensions from savings pots built up while in work. Several schemes, all less daring, are under consideration. A notable one would feature pay-as-you-go for most retired people, but with tighter eligibility rules; a guaranteed minimum pension for the poorest; and a capitalisation system for high earners. According to Mr Tafner, one of its authors, it would save 1.3trn reais over ten years.

But recently Mr Bolsonaro has talked of “slicing” reform into stages, starting by introducing a minimum pensionable age. And congress may dilute any scheme further, as it did with Mr Temer’s. Markets will grow impatient if a proposal is not making its way through congress by July, says Arthur Carvalho of Morgan Stanley, a bank. But even the most comprehensive reforms under consideration will not solve all Brazil’s fiscal problems. They would take years to have much effect on spending, since current pensioners would continue to benefit from the old system.

Success would, however, increase confidence, lower long-term interest rates and raise hopes for other much-needed reforms. These include privatising inefficient state companies (a one-off deficit-slasher), further cutting subsidised lending (which distorts credit markets and monetary policy) and simplifying a regressive tax system that gives 4% of GDP in concessions to businesses. “It has no rules, only exceptions,” jokes Bernard Appy of the Centre for Fiscal Citizenship, a think-tank.

The big question is whether Mr Bolsonaro can bring congress into line. His Social Liberal Party has little more than a tenth of the seats, and he says he will not corral lawmakers in the usual Brazilian fashion, namely by buying off parties with pork-barrel spending and appointments to high-spending ministries. He plans instead to negotiate issue by issue with cross-party interest groups, such as evangelicals, security hardliners and farmers. That may not work. “The caucuses will back him when it comes to their own interests, but when it’s time to vote for pensions reform, each congressman thinks of himself,” says Simone Tebet, a senator from the centrist Brazilian Democratic Movement.

Mr Bolsonaro was elected on a platform of abolishing privileges, so he must emphasise that message to bring pressure to bear on congress, says Arminio Fraga, a former central-bank director who worked with Mr Tafner on pension reform. But Mr Bolsonaro and Mr Guedes had early warning of how hard their task will be when they failed to dissuade the outgoing congress from increasing public-sector pay by 16%, far above inflation. Meanwhile, an auction for oil-exploration rights hit a snag after Mr Guedes offered to share the revenue with the states, only to back-pedal after realising this would bust the spending cap that was Mr Temer’s main achievement. Congress, sensing an opportunity, refused to approve the auction without getting a cut.

The new economic team is committed to reform and conditions are favourable, says Eduardo Guardia, the outgoing finance minister. But, he adds with some understatement, “There is execution risk.” Others are heartened that, after so long, pension reform leads the next president’s agenda. “Debate about the allocation of government spending has never happened before in Brazil,” says Mr Carvalho. “What is a priority? Do you take from teachers, from judges, from farmers or from families?” The answer—“All of them”—is unpalatable. But it is the one Brazil needs.