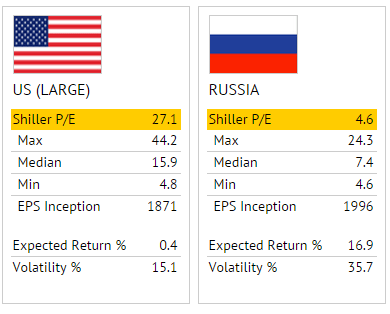 What’s Next for Russian Stocks?

You have to hand it to Russian President Vladimir Putin. He had us all guessing. The usually highly visible Russian leader disappeared from public view for a week and half, leading to speculation that he was dead or secretly deposed in a coup.

Russia being Russia, it wouldn’t be too shocking if Putin actually had been deposed and replaced with a sinister vodka-swilling robotic decoy. But I digress…

When asked where he had been, his only response was “It’s boring without rumors.”

Well, it’s never boring with Russian stocks. The Market Vectors Russia ETF (RSX) is up 11% year to date, making it one of the best-performing non-levered country funds in 2015. Meanwhile the S&P 500 is barely positive. But before you run out and buy RSX, remember that it has already given up more than half its gains for the year and that it is down more than 60% over the past four years. The Market Vectors Russia Small Cap ETF (RSXJ) has fared even worse, down over 70% since its launch in 2011.

But to a contrarian value investor, Russian stocks are also hard to ignore. With the single exception of Greece—which may still get booted out of the Eurozone before the end of the year—Russia is the cheapest market in the world.

Now, to be fair, Russian stocks are always cheap owing to Russia’s geopolitical risk, its disregard for the rule of law and for the fact that…well…this is the country that was the fountainhead of global communism for over 70 years. Russia’s median cyclically-adjusted price/earnings ratio (“CAPE” or “Shiller P/E”) is 7.4, or less than half that of the United States.

Today, Russian stocks are cheap even by Russian standards, trading at a CAPE of just 4.6. That’s actually the lowest they’ve been priced in the history of post-communist Russia.

But cheap stocks can stay cheap…and get even cheaper…if the conditions that made them cheap to begin with stay in place.

Investor sentiment towards Russian stocks shifts with three overlapping geopolitical forces. The first—and definitely most important—is the collapsing price of crude oil. For all of Russia’s achievements as a country, it is still essentially a petrostate. Its economy depends disproportionately on energy, with oil and natural gas sales accounting for nearly 70% of export revenue. About 45% of the Russian government’s tax revenues come from energy-related taxes, and more than 40% of the portfolio of RSX is in energy stocks.

The second factor is the collapse of Russia’s currency, the ruble, which has lost half its value relative to the dollar over the past year. The fate of the ruble is tied closely to the price of oil, but it is a risk factor in its own right. Even if Russian stocks rally in local-currency terms, a foreign investor can still get wiped out due to further ruble declines. But a stable crude oil price should mean a stable ruble, all else equal.

And finally, we get to Ukraine standoff. This is the factor that tends to get the most media attention, but I consider it the least important. Yes, the Western sanctions sting, and the U.S. State Department has said that the sanctions regime will remain in place indefinitely. But Ukraine isn’t important enough to the U.S. or Europe to risk an escalation with Russia, and given enough time, Russia will probably convince some of the less committed European countries to quietly water the sanctions down.

So it essentially comes back to oil. If the price of crude oil stabilizes, then so does the ruble, and the Ukraine sideshow remains a distraction and not much else. So, if you’re looking to speculate in Russian stocks, then you had better feel warm and fuzzy about the prospects for crude oil.

My recommendation? Don’t risk your mortgage payment on it, but with the speculative part of your portfolio Russian stocks might be worth a stab at these prices. I’d recommend starting with a small position and averaging in. But I’d also recommend setting a strict stop loss going into the trade. This is a time when a small loss can become a large one very quickly without proper risk management in place.

Mr. Sizemore has been a repeat guest on Fox Business News, has been quoted in Barron’s Magazine and the Wall Street Journal, and has been published in many respected financial websites, including MarketWatch, TheStreet.com, InvestorPlace, MSN Money, Seeking Alpha, Stocks, Futures, and Options Magazine and The Daily Reckoning.