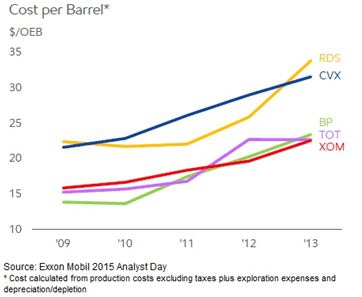 Between the plunge in oil prices and economic sanctions, the Russian economy is taking a one-two punch. Even as stocks markets in the United States, Europe and Japan are hitting new highs, the Market Vectors Russia ETF (NYSE: RSX) has plummeted 19% over the last year.

Such periods of distress can also spell opportunity. Recall the investing maxim: be fearful when others are greedy and greedy when others are fearful. That’s the tack being pursued by Exxon Mobil Corp. (NYSE: XOM), which has taken note of a huge opportunity in lower asset prices, a weak ruble and one of the biggest energy finds on the planet.

Putting The Shale Revolution To Shame
In the United States, the revolution in shale exploration and drilling has been the big story in energy for the last several years. However, surging production growth has led to oversupply and falling crude prices.

Even as oil prices plummet, long-term energy demand remains intact. In its 2035 energy outlook, BP forecasts 0.8% annualized demand growth of liquids, to 4.97 trillion tons of oil equivalent. Compare that to production growth of 0.7% annually to 4.82 trillion tons over the same period. It might not seem like much of a difference, but that annual production deficit will add up, supporting higher energy prices over the long term.

Indeed the current industry supply problem may already be self-correcting. Most explorers and drillers are already slashing their investment budgets and production estimates over the next couple of years, which may be overstated.

In the face of near-term weakness and long-term strength in energy prices, Exxon Mobil is seizing the initiative. The company just bought the rights to tens of millions of acres in the Arctic Circle, which could hold upward of 90 billion barrels of oil and 1,670 trillion cubic feet of natural gas, according to the U.S. Geological Survey.

The Arctic fields are in Russian territory, and the timing seems fortuitous in light of the falling ruble and Russia’s rising need for cash. Exxon Mobil’s land acquisition brings total rights to 63.7 million acres, more than four times the 14.6 million acres it holds in the United States.

U.S. and European sanctions forced Exxon to shut down Arctic drilling in Russia last October, but there is no barrier to other exploration activities such as seismic research, exploration and even pipeline construction. New Russian fields were not expected to contribute production until 2020, with exploration rights not expiring until 2023. The company has plenty of time to wait out the sanctions on drilling.

Before sanctions hit Exxon’s Russian drilling, exploration wells were extremely successful with just one field in the Kara Sea estimated at 340 billion cubic meters of natural gas and 100 million metric tons of oil. That is almost a billion barrels of oil. Rosneft CEO Igor Sechin has been adamant about maintaining the company’s contracts and contact with Exxon Mobil.

Exxon, the third-largest publicly traded company in the world, certainly has the financial strength to ride out sanctions.

The company’s return on invested capital, or ROIC, of 16.2% led the market last year, well above its closest peer Chevron Corp. (NYSE: CVX), which had a ROIC of 10%. XOM’s diversification in upstream production, chemicals and downstream will help it weather weakness in oil prices.

On top of the dividend, a share repurchase program pushed the Total Yield toward the 6.0% mark last year. Shares paid a 2.7% dividend yield and a 2.7% buyback yield last year. While investors shouldn’t expect the same level of buybacks this year, the company has plenty of cash flow to support the dividend. Beyond the strong cash flow, Exxon has $ 4.6 billion in cash and just 14% of its capital structure, or $ 29 billion, in debt.

Exxon achieved its four million barrels of oil equivalent per day (MOEBD) product target last year and is targeting 4.3 MOEBD by 2017. Volume from new projects should offset declines with 16 projects coming online by 2017. Liquids production is seen higher by 7% this year and 4% in each of the following years. 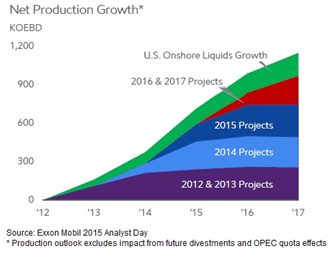 To be sure, the slump in oil prices will lead to a 50% drop in per share profits this year, to around $ 3.75. Analysts expect earnings per share to rebound above $ 5 next year.

Looking into the next half decade, profits could rise nicely higher on the backs of surging production. In effect, growth on Russian assets through 2020 makes shares a lottery ticket that could pay off big time.

Risks To Consider: Shares are down 7% over the last year and the bet on Russian fields is certainly not a short-term play. Be ready for some downside if oil prices weaken further this year. Meanwhile the 5-to-10-year upside should be significant.

Action To Take –> Take advantage of pessimism in the energy space to play contrarian with Exxon Mobil and benefit from what could be a huge production opportunity on new Russian acreage.

If oil, natural resources or commodities are what interests you, look no further than StreetAuthority’s Scarcity & Real Wealth. Our resident natural resources expert Dave Forest has more than a decade’s experience as a trained geologist and analyst. His industry insight allows him to read the markets and provide the most timely, potentially lucrative advice for everything from oil and gold to molybdenum. To gain access to Dave’s latest research, click here.