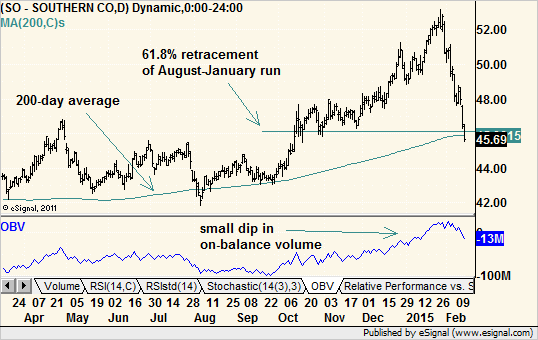 I was looking for a substantial correction in the utilities sector, and it appears to be well on its way to completing one. But some stocks in the group fell harder than others and may already be ripe for the picking.

My favorite right now is Atlanta-based Southern Company (NYSE: SO). This utility company generates electricity through coal, nuclear, oil and gas, and hydro resources and distributes it in the states of Alabama, Georgia, Florida and Mississippi.

Since peaking at $ 53.16 in late January as investors sought the relative safety of utilities, the stock has fallen 14% in less than three weeks’ time. That is a very large move for a member of a normally staid sector, but it is good news for investors looking to buy now.

I have been waiting for the utility sector as a whole to retrace 50% of its rather sharp rally that began in August.

SO has already completed a 61.8% Fibonacci retracement of its August to January run and is also touching its 200-day moving average.

That by itself would be a compelling buy point in most circumstances. And with interest rates seemingly on track to stay quite low, the recent decline looks very much like a correction from overbought conditions. In other words, I expect prices in the sector to firm up again soon.

While I do not like that the days with the largest losses since the peak also had the highest levels of volume, the overall cumulative volume condition of the stock is still favorable.

On-balance volume, which keeps a running tally of volume traded on up days minus volume traded on down days, has been in a rising trend since August. In other words, not much money flowed out during the sell-off relative to what flowed in during the bull run, and that suggests underlying demand for shares remains strong.

Finally, the stock is now oversold using the same measures — momentum indicators such as the Relative Strength Index (RSI) — used to determine overbought conditions in January. SO seems to have overshot whatever the “expected” correction may have been, and that is yet one more reason to expect buyers to return soon.

On Feb. 12, the stock fell rather sharply into the support zone outlined above as the shares went ex-dividend, which means buyers of the stock that day would not be entitled to the next dividend payment, expected in early March.

Often, a stock drops on its ex-dividend day by the amount of the dividend to be paid, $ 0.53 in the case of Southern Company. But the stock’s $ 1.39 decline that day seemed excessive, since there was little news to explain the drop other than a generally weak utilities sector. This may be good for new buyers, as we can equate it to a mutual fund selling below net asset value.

Shares look very attractive at this level, and I expect a rebound toward their previous highs over the next several months.

Editor’s note: Southern Company currently offers a very nice 4.6% yield. But for those of you who wish to generate income on shares now, there is another option.

If you want to learn more about how to open a high-income brokerage account and start collecting monthly income now, check out this free report.