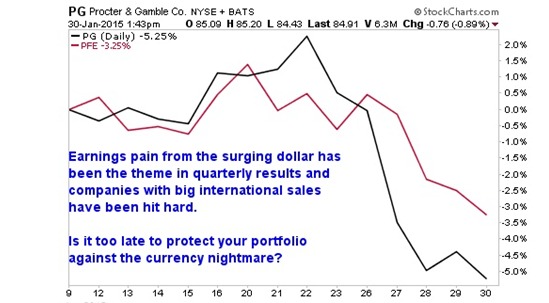 How To Avoid The Currency Nightmare In Your Portfolio

That trend has compelled many U.S. companies to steadily expand their sales footprint in these economies. The net result: foreign sales at companies in the S&P 500 rose to more than 50% of sales today, from 30% of total sales in 2000.But the outperforming U.S. economy and the strong dollar has thrown a wrench in those plans. Foreign earnings have hit U.S. companies as international markets lag and weaker currencies get translated into fewer dollars every quarter.The Procter & Gamble Company’s (NYSE: PG) CFO Jon Moeller pointed to foreign exchange as the primary challenge facing the company and the reason it missed earnings expectations by 6% in the most recent fourth quarter. The company books two-thirds of its sales from outside the United States. Foreign exchange could reduce 2015 sales by as much as 5% at P&G and lead to a 12% hit to earnings.

Shares of Pfizer, Inc. (NYSE: PFE) slid after the company reported a 3.5% decline in earnings in 2014, thanks to a stronger dollar. The company also noted that 2015 earnings would come in lower than consensus forecasts, thanks to currency headwinds.

Is it too late to protect your portfolio from the currency nightmare? How bad could things get if the U.S. dollar continues to head higher?

Staying True To The Red, White and Blue
The market volatility from a strengthening dollar is likely to continue through at least the first half of the year. The European Union has just committed to a massive monetary stimulus program and Japan is still adamant that it won’t ease policy until its 2% inflation target is reached. China growth continues to slow and emerging markets are reeling from the drop in commodity prices. All of those factors favor weaker local currencies and a stronger dollar.

Meanwhile, expected interest rate increases in the United States should provide a tailwind to the dollar, as global investors shift funds to countries that offer higher fixed-income yields. This means, the dollar is the odds-on favorite for the year, but you still have time to protect your portfolio.

One way to do this is to look for foreign companies that may benefit from a stronger dollar. A weaker local currency boosts the relative competitiveness of foreign firms in global markets. Many countries are looking to import more goods into the U.S. economy, thanks to that currency advantage.

A better option may be to focus on domestic companies that sell exclusively to customers in the United States. A decade ago, investors were imploring management to increase the company’s foreign growth exposure. Now those same companies benefit from a strong U.S. economy and don’t have to worry about the currency nightmare.

Here are some examples of companies that derive most or all of their sales from the United States.

Southwest Airlines Co. (NYSE: LUV) has not only benefited from a strengthening economy, but plummeting fuel prices have helped as well, pushing shares 50% higher over the last year. Management’s decision to avoid jet fuel prices hedges now looks quite savvy.

While the company started as a regional carrier, it has since expanded nationally and plans to add limited service to Costa Rica, Mexico and Belize later this year. The airline has been boosting revenue at a 12% annual pace over the past five years and is now the largest carrier in terms of domestic originated passengers, controlling 24% of the domestic market.

Ross Stores, Inc. (Nasdaq: ROST) is the largest off-price apparel and home fashion chain in the country with more than 1,300 retail outlets in 33 states, the District of Columbia and Guam. The company benefited from the recession as shoppers sought out value, and Ross has been able to hold on to customers through the improving economy.

Sales in the off-price retail sector increased 6% in 2013 compared to a 1% increase for total national apparel sales, according to market research firm NPD Group. Sales at Ross Stores have increased at a compound annual pace of 9.5% over the last five years.

CVS Health Corp. (NYSE: CVS) is benefiting from the aging population and increased access to healthcare through its integrated pharmacy and retail centers. The company is one of the largest pharmacy benefits managers in the nation with 63 million plan members and one billion claims processed in 2013.

A decision to stop selling tobacco products has negatively impacted retail sales, but pharmacy and PBM remain solid pillars of growth. The company recently announced a 10-year deal with Cardinal Health, Inc. (NYSE: CAH) to form the largest generic sourcing program in the nation. The scale economies of that deal should lead to margin improvement. Sales have increased at a compound annual rate of 6.5% over the last five years.

Risks To Consider: A stronger dollar is currently dragging down shares of companies that have ample foreign exposure. Yet, that factor could eventually become a tailwind if the greenback resumes a multi-decade weakening trend. Be ready to increase exposure to companies with overseas sales when global growth returns.

Action To Take –> Protect your portfolio from currency effects and take advantage of the U.S. economic resurgence by building a portfolio around strong companies that sell exclusively to U.S. customers.

StreetAuthority is proud to present its newest research report “The Top 10 Stocks For 2015.“ Since we first began publishing this annual research report in 2003, our picks have beaten the overall market eight out of 12 years, including years with average gains of 37%… 38%… and 39%. For comparison, the S&P 500 gained more than 30% in just one year since 2003. To learn more about this list of elite companies, click here.