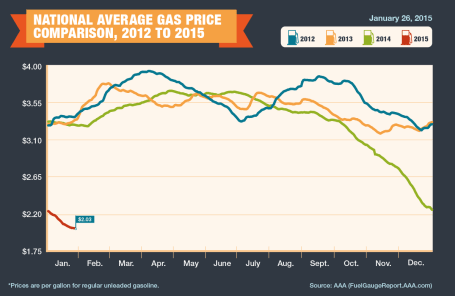 In the weeks building up to Super Bowl XLIX (New England Patriots vs. Seattle Seahawks) much of the media hype was focused on the controversial alleged “Deflategate”, or the discovery of deflated Patriot footballs, which theoretically could have been used for an unfair advantage by New England’s quarterback Tom Brady. While Brady ended up winning his record-tying 4th Super Bowl ring for the Patriots by defeating the Seahawks 28-24, the stock market deflated during the first month of 2015 as well. Similar to last year, the stock market has temporarily declined last January before surging ahead +11.4% for the full year of 2014. It’s early in 2015, and investors chose to lock-in a small portion of the hefty, multi-year bull market gains. The S&P 500 was sacked for a loss of -3.1% and the Dow Jones Industrial index by -3.7%.

Despite some early performance headwinds, the U.S. economy kicked off the year with the wind behind its back in the form of deflating oil prices. Specifically, West Texas Intermediate (WTI) crude oil prices declined -9.4% last month to $ 48.24, and over -51.0% over the last six months. Like a fresh set of substitute legs coming off the bench to support the team, the oil price decline represents an effective $ 125 billion tax cut for consumers in the form of lower gasoline prices (average $ 2.03 per gallon nationally) – see chart below. The gasoline relief will allow consumers more discretionary spending money, so football fans, for example, can buy more hot dogs, beer, and souvenirs at the Super Bowl. The cause for the recent price bust? The primary reasons are three-fold: 1) Sluggish oil demand from developed markets like Europe and Japan coupled with slowing consumption growth in some emerging markets like China; 2) Growing supply in various U.S. fracking regions has created a temporary global oil glut; and 3) Uncertainty surrounding OPEC (Organization of Petroleum Exporting Countries) supply/production policies, which became even more unclear with the recent announced death of Saudi Arabia’s King Abdullah.

More deflating than the NFL football’s “Deflategate” is the approximate -17% collapse in the value of the euro currency (see chart below). Euro currency matters were made worse in response to European Central Bank’s (ECB) President Mario Draghi’s announcement that the eurozone would commence its own $ 67 billion monthly Quantitative Easing (QE) program (very similar to the QE program that Federal Reserve Chairwoman Janet Yellen halted last year). In total, if carried out to its full design, the euro QE version should amount to about $ 1.3 trillion. The depreciating effect on the euro (and appreciating value of the euro) should help stimulate European exports, while lowering the cost of U.S. imports – you may now be able to afford that new Rolls-Royce purchase you’ve been putting off. What’s more, the rising dollar is beneficial for Americans who are planning to vacation abroad…Paris here we come! 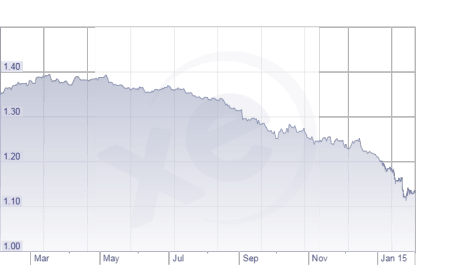 Another fumble suffered by the global currency markets was introduced with the unexpected announcement by the Swiss National Bank (SNB) that decided to remove its artificial currency peg to the euro. Effectively, the SNB had been purchased and accumulated a $ 490 billion war-chest reserve (Supply & Demand Lessons) to artificially depress the value of the Swiss franc, thereby allowing the country to sell more Swiss army knives and watches abroad. When the SNB could no longer afford to prop up the value of the franc, the currency value spiked +20% against the euro in a single day…ouch! In addition to making its exports more expensive for foreigners, the central bank’s move also pushed long-term Swiss Treasury bond yields negative. No, you don’t need to check your vision – investors are indeed paying Switzerland to hold investor money (i.e., interest rates are at an unprecedented negative level).

In addition to some of the previously mentioned setbacks, financial markets suffered another penalty flag. Last month, multiple deadly terrorist acts were carried out at a satirical magazine headquarters and a Jewish supermarket – both in Paris. Combined, there were 16 people who lost their lives in these senseless acts of violence. Unfortunately, we don’t live in a Utopian world, so with seven billion people in this world there will continue to be pointless incidences like these. However, the good news is the economic game always goes on in spite of terrorism.

As is always the case, there will always be concerns in the marketplace, whether it is worries about inflation, geopolitics, the economy, Federal Reserve policy, or other factors like a potential exit of Greece out of the eurozone. These concerns have remained in place over the last six years and the stock market has about tripled. The fact remains that interest rates are at a generational low (see also Stretching the High Yield Rubber Band), thereby supplying a scarcity of opportunities in the fixed income space. Diversification remains important, but regardless of your time horizon and risk tolerance, attractively valued equities, including high-quality, dividend-paying stocks should account for a certain portion of your portfolio. Any winning retirement playbook understands a low-cost, globally diversified portfolio, integrating a broad set of asset classes is the best way of preventing a “deflating” outcome in your long-term finances.

DISCLOSURE: Sidoxia Capital Management (SCM) and some of its clients hold positions in certain exchange traded funds (ETFs), but at the time of publishing SCM had no direct position in any other security referenced in this article. No information accessed through the Investing Caffeine (IC) website constitutes investment, financial, legal, tax or other advice nor is to be relied on in making an investment or other decision. Please read disclosure language on IC Contact page.